by ShawnDion
Just wanted to give you a head's up last year I bought FontCreator 3 pack for commercial use and today I'm lauching what you might call FontCreator's biggest challenge to the software (No idea if the tool will handle it) but it's a colored font that I'm taking people's pictures into making it into a work of art.

You can download the demo font on the page here if you like at the same time might give people some brainstorming ideas on what's next that can be done with FontCreator.

I'm mentioning the project but the main reason for my post today is to say thank you for such a great tool without it I wouldn't of been able to launch this project.

by Bhikkhu Pesala
The quality is surprisingly good, but as a font it is completely useless. 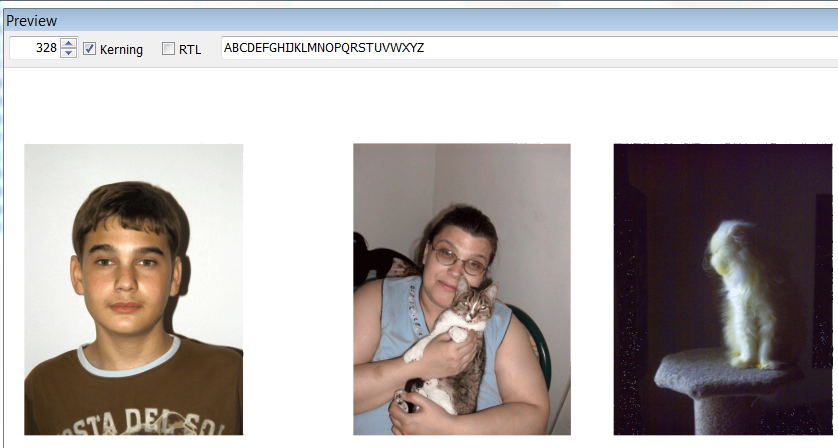 William will no doubt be impressed, but I wonder why anyone would take the trouble to create this. Why not use JPG photographs?

For clipart with 4 or 8 colours it might work, for photos with 256 colours or however many layers you used, it's not workable even with one glyph, let alone 64K.

I think it's a case of back to the drawing board, or rather, put your thinking cap on to find a really useful benefit of this new technology.

by ShawnDion
@Bhikkhu Pesala
Thanks for the reply and posting the Font Example much appreciated.

I agree it might be useless for some, for others this could be an idea to make more out of fonts and at the same time I'm looking for more brainstorming ideas to do more with this (Heck I'd be crazy enough to convert clipart libraries) however the main reason I'm doing this is for 2 things:

1. It's a art project with intentions of seeing how far and how many will want to be part of this form of art.

2. If I can get people motivated with this Font Standard maybe just maybe we can get a ISO done correctly and then all of us that work in creating fonts can do much more for ourselves and our clients.

The original font demo I made is sloppy it was a proof of concept, it was made for demo purposes the real one will have less collisions or possibly none and the glyph's themselves will be optimized to not have such a huge footprint even if I max out the font itself. I am currently running alll the 16 million colors via macro to add them to a blank font to see what the storage of the full color palette would be (Boy do I wish I could import a text file for this one) but all I can say is that without FontCreator 7.5 (Be upgrading to 8 with this project) there no way this could be done, I'm so glad to have purchased a copy best investment ever.

The only advantage I can give compared to a jpg is that when in small qualities inside a font the only way to grab the image is via print screen as right click save doesn't work on theses inside the browser so it might be something for thoses who need some kind of protection.

For sure if I can make a tool or a video in showing other on how to do it I will as this project is to make it immortal but for the rest I'm all for improving everyone's lives and maybe a new chapter in the way things are done who knows.

Well my project is not getting any hits which is exactly what I expected as it's something that has not grown in the past year of popularity due to the fact that there wasn't a real purpose for it.

I'll have a guide ready for you if you want it in about 2 weeks of all the steps and tools used to create the 256 layers, should you be crazy enough though you can go for true color as the technique will let you do so.

The process requires dos batch files and command lines to split svg files by colors and by a certain order for importing pdf's to fontcreator with a special layout to have them all perfectly aligned.

Who know's you might be able to improve on the process and at the same time you might find a better use for this technology.

Right now I"m going to concentrate on my official project which is cancerfonts it's a project of fund raising for people who have cancer and want to fund by leaving their mark (Hence a handwritten font) I'll add their photo and story straight to the font to make sure they are never forgotten, I was wishing that my kickstarter project would get some hits to pay for the hosting and the basic tools but I guess like you said the usage was just not there but I won't give up on my main project lost a friend last year due to cancer and was just a few days too late in getting her part into this project (Took her in a flash of a light).

ShawnDion wrote:I'll have a guide ready for you if you want it in about 2 weeks of all the steps and tools used to create the 256 layers, should you be crazy enough though you can go for true color as the technique will let you do so.

Please don't bother. I am crazy sometimes, but not that crazy.

Colour font technology is a solution in need of a problem. I cannot think of any situation where it would really be useful, apart perhaps on Mobile devices, which I don't use myself.

I added some colour glyphs to a couple of my fonts, but it was just an experiment to test FontCreator, and see what needed improving. For my work, coloured fonts have no practical benefit as I use Windows 7. If I want colour, I will use vector graphics.

by Erwin Denissen
You should consider uploading a web font demo page, similar to this one:
http://www.high-logic.com/fontcreator/c ... rlogo.html

However rendering the font is really slowwwww. Anyway we could make and upload one to our web site. Just let us know.

However rendering the font is really slowwwww. Anyway we could make and upload one to our web site. Just let us know.

I just saw your logo in colour on Windows xp using Firefox 32.0.

Was away for a few days family business, absolutely I'll get right on working on that my kickstarter project didn't work as expected but why waste the technique might as well let others enjoy using it.

And your right Firefox 32 now accepts theses fonts heck I might even make one so that they can beta test their engine better to smooth things out.

But besides a spike lag on the first time the font is used it's not that bad.

P.S: I'll work something nice with a tutorial for both versions even though I don't have the latest one yet I can at least make the documentation to match the revision.

P.P.S: As for my file lagging I figured out what was the cause (Vector collisions) so I'll clean it up and re-upload it.
All times are UTC
Page 1 of 1
Powered by phpBB® Forum Software © phpBB Limited
https://www.phpbb.com/