I don't get it, but that did the trick, and that's all that matters, I guess -- thanks again, Erwin!

Oh, how interesting! I love learning little typographic anomalies from that period like this -- great stuff!

Yes, that one I knew -- it's quite common in texts from that period to see vowels with a macron accent signifying an omitted "m" or "n." I have no idea why they did that -- and only sometimes, it seems rather haphazard whenever they do, and doesn't seem to have to do with trying to reduce line-length or anything like that (to make things "fit" better or whatever). I've figured out almost all the other typographic mysteries from that period, but that's one that escapes me -- it's on my bucket list, I just hope I figure that one out (too) before I die.

However, I am not going to attempt a translation.

I haven't checked, but I bet Google Translator can probably do it (personally, I don't care, it's not what the text says that interests me here, but the font that it's written in).

The superscript 9 is a letter in it's own right, try unicode codepoint A770 (modifier letter us).

Some things which might be of interest to you are 'Latin Paleography' which is available for free download at http://guindo.pntic.mec.es/jmag0042/palefont.html and another interesting site is http://medievalwriting.50megs.com/map.htm.

If you want to do a historical font then you might want to include a selection of the MUFI characters, that way it becomes useful to medievalists.
Top

PJMiller wrote: ↑
Tue Nov 14, 2017 7:09 pm
If you want to do a historical font then you might want to include a selection of the MUFI characters, that way it becomes useful to medievalists.

For the last few days I've done no work on any of my fonts, but rather have been researching the 16th-century printer who designed the metal type that my fonts are based on, just to find out more about him and his various works. And now this, on top of that.

Actually, I'm not complaining -- quite the contrary! I'm sure this will be quite fascinating to read up on this stuff via those links you gave. Thanks! I'm getting no work on my fonts done, but what the heck, I guess this is all part of my "apprenticeship."

I started reading the stuff there on those links you gave, PJ, and y'know what? I think I might back-burner doing anything more in-depth like that with my fonts. It is very interesting, though! And that does sound like a great idea, to make my fonts more usable for historical contexts like that -- but I'm not sure if I'll personally ever have such a need, though. I've got three fonts on the go at the moment -- my blackletter "Wickednesse" font, plus a roman and italic font, all based on original the same 16th century source -- and for my own purposes I was going to use them in ebooks that I make (and revise some that I already have published) and to totally re-do my website, too. And I'm really getting itchy feet about doing those other non-font projects, and getting these fonts done are rather holding everything up for me, so I think I'll just concentrate on getting the basics finished up for now -- I can always go back later on, down the road, and come out with a "version 2" of them, if/when I do get re-enthused about doing so.

So again, thank you! I'm gonna put that all aside for now, but I really do appreciate those links (etc.) and I can well foresee going back and making my fonts bigger-and-better some day -- just not right now, though. Cheers!

Shouldn't the italic angle control be disabled when the 'Italic' checkbox is unchecked?

The OS uses that angle setting for angling the cursor.

What about a font that isn't designed to be an italic but still has a slant to it (I have some). Wouldn't it still be useful for the OS to present an angled cursor on a "Regular" style that has slanted tension in the design?

The OS uses that angle setting for angling the cursor


Is that what that's for -- or supposed to be for, anyway? My OS doesn't angle the cursor over italicized text.
Top

One such application that does...the red slanted vertical line is the text cursor.

Tis a pity all that. I believe applications ought to respect and use those values. Then again, it would break a lot of fonts with their missing and or poor values entered.
Top

I definitely agree on that, that things like underlining, etc. should make use of whatever has been provided in the font.

Back to this angle thing, though, I just checked a couple different programs, and I don't seem to have anything where the cursor gets "italicized," too, when it's within italicized text. Is that the ONLY purpose that that angle thing exists in the font properties options, though? As I mentioned earlier, re the font I'm currently working on, the angle seems to vary somewhat between characters -- just wondering if that's anything to be concerned about. If the one-and-only purpose of getting that angle set is simply to angle the cursor, though (if one's software does that), then I guess it's no big deal if I don't have it "perfect."
Top

Aside from XDP (Xara Designer Pro) that I used in the previous screen shot, PagePlus & Affinity Designer also slant the cursor according to the font's numerical setting. MS Word also slants the cursor. This screen shot is from AD: 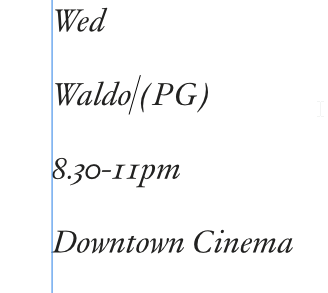 I would heartily recommend AD (Affinity designer) for font testing. It is relatively inexpensive and no matter how esoteric of a feature I write in a font, it handles them all properly. When it was in beta, there were issues that I worked with Serif to correct and they were within a beta release or two. PagePlus is also good for testing fonts (and, well, the other things it is good for as regards layout work) and is very inexpensive because it will receive no further updates. But AD is modern, current and its OT Feature support is better than PP.

But yes, that is all that setting does. As you are experiencing with your current software, it can mean nothing. Even if I set it at zero, applications that do use that setting (like I listed above) would work just fine. So whether you use it or not is up to you. I find it a pleasant touch when using an application that utilizes that setting.

As for various angles in a font, and if one desires the angle setting to be non-zero, I would place and rotate a guideline on representative glyphs and make a choice re the angle to use.

I have a font, Lekhana, in which the Regular style has a slight slant. To calculate the italic angle, select a couple of nodes, and use the g shortcut to create a guideline. Double-click the guideline, and set it to "Diagonal Angle." Now subtract that angle from 270 to get the italic angle of about 6 deg. 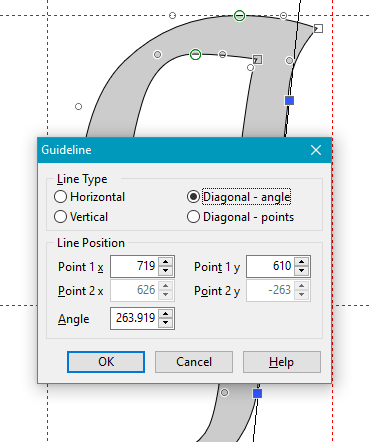 The font test window unfortunately does not display the italic cursor, so test it in another application like PagePlus while the Font Test window is still open. 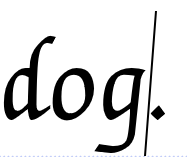 Neat tip on using the nodes for setting the guideline, BP.

Psymon wrote: ↑
Sat Nov 18, 2017 7:29 pm
As I mentioned earlier, re the font I'm currently working on, the angle seems to vary somewhat between characters -- just wondering if that's anything to be concerned about.

There is an optical illusion which takes place with text. If all your glyphs have the same italic angle then they appear to be different, the tall ones appear to have a greater italic angle than the short ones so you have to ease off the angle a bit with tall characters.

How much ? ... Well you have to judge it by eye. The rule of thumb in fontmaking is that if it looks right then its right even if the numbers would suggest otherwise.
Top

The big question: what is the best way to prevent this from happening on the machines of customers that already have a regular version on their machine when we release a Bold or Italic version?
FC12.0 Professional
Top
Post Reply
30 posts