How to pack a little more punch?

How to pack a little more punch?

I could use some suggestions here -- I'm not sure how to explain it other than to just simply show you (and explain it in there), so I threw together this image here... 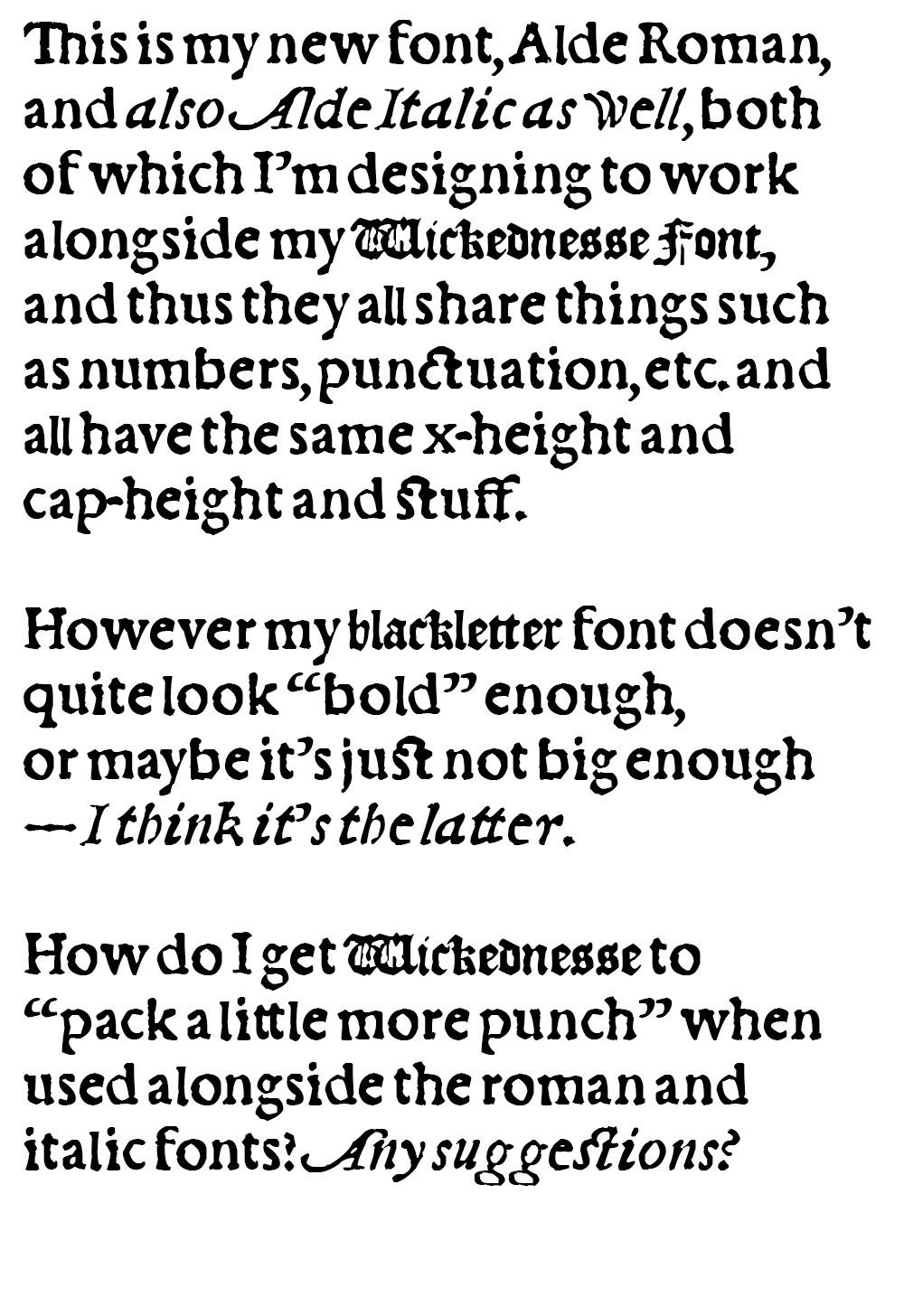 See what the problem is? All three fonts -- my blackletter, roman and italic -- all share the same x-height, etc., but somehow my blackletter font (Wickednesse) doesn't pack as much of a punch as I thought/hoped it would. If it was, like, even just one point size bigger in size then I think it would stand out more -- but how do I go about making it slightly bigger in that way, without having to do it "manually" in my final-end software? In a way, I guess it would be cool if the blackletter font could be used in the same way that one might use bold in certain contexts.

Does that make sense? Hope I explained what the problem that I "see" here is.
Top

Hmm... no responses. Perhaps I gave the only sensible response right in my initial query here? And so that's what I thought I'd try -- scale up the size of my Wickednesse font just a little.

So I thought I'd start with trying 105% increase in size using the "Scale" feature in the Glyph Transformer -- not all the characters, I left things like punctuation, symbols, etc. all the same (since they're used across all three of my fonts here), but I only scaled up the main alphabetic characters (including those in the extended character sets, and my ligs/alts in the PUA). That seemed to help, but it still seemed to need a little more, so I did the same again, another 105% increase in size, and that seemed to do the trick. I could probably go a little bigger, even, and give my blackletter a little more "punch" (whenever it might occur within the context of stuff written with my roman/italic fonts as the base font), but I think this is probably enough.

For reference, here's the same graphic that I uploaded with my initial post, but this time with those few words written in my Wickednesse font bumped up in size by 110% (110.25%, to be exact)... 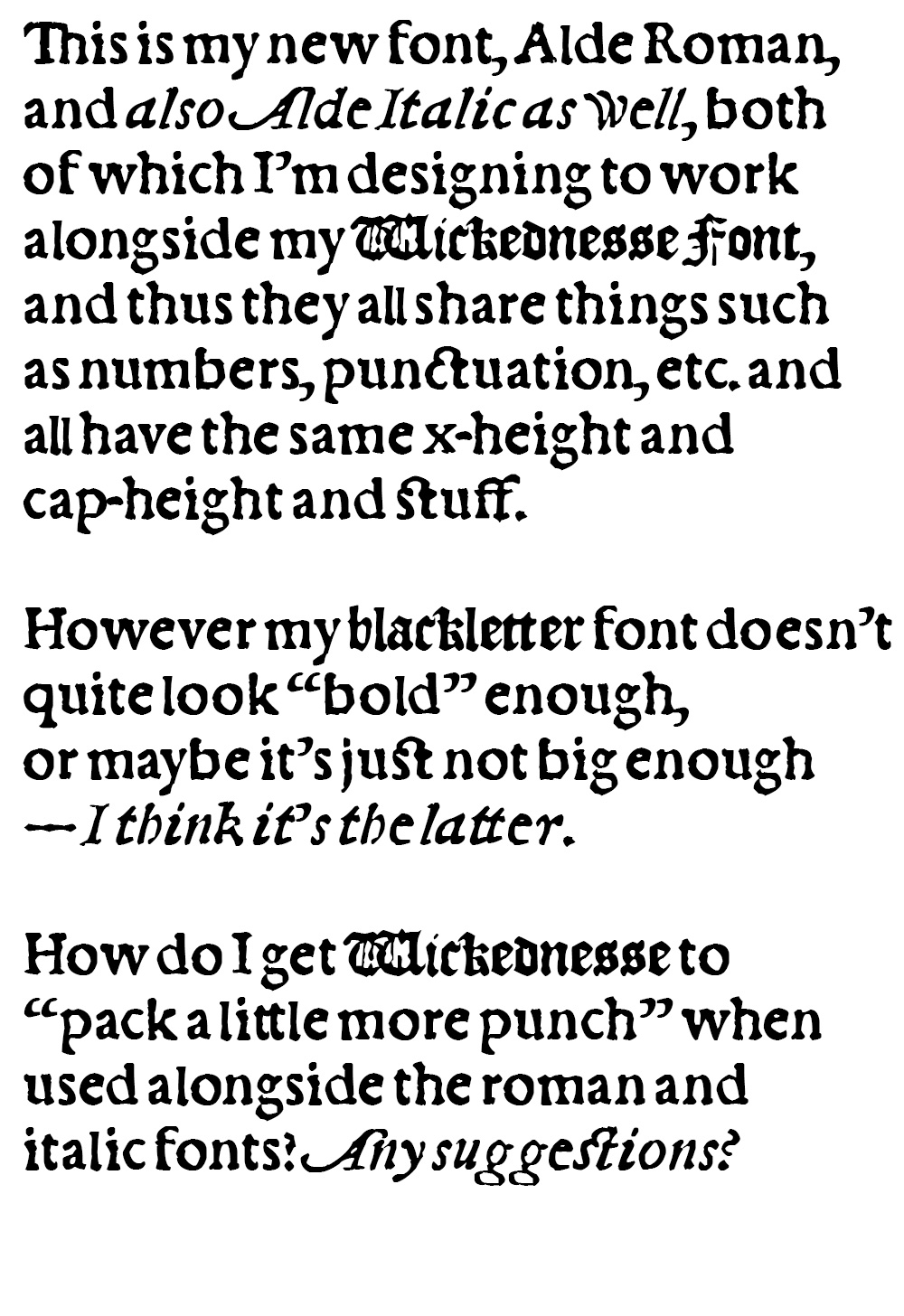 That's better, isn't it? I also fixed up a couple little things in the Roman font which you might notice, too, but the main thing I was addressing here was the "un-bold-ness" of the blackletter font in comparison to the reg./ital. fonts, and I think this pretty much did the trick.

If anyone has any comments on that, fire away! I'm still open to suggestions for better ways to go about this (or anything else, for that matter).
Top

Hi,
I'm just learning, and saw your font. I try to duplicate old texts using Abbyy Findereader and fonts I find on the internet. Since I look at old texts, I just felt I needed to complimant you on this one! Amazing! Look like "the real thing"! GREAT JOB1

Do you sell your fonts ?
thanks
ron
Top

ocular wrote: ↑
Wed Aug 15, 2018 2:44 am
I'm just learning, and saw your font. I try to duplicate old texts using Abbyy Findereader and fonts I find on the internet. Since I look at old texts, I just felt I needed to complimant you on this one! Amazing! Look like "the real thing"! GREAT JOB1

Oh, thank you, Ron -- so sorry for such a much-belated reply, but I only just came across your message/reply here just now! I've actually been totally out-of-the-loop for almost a year now, got frustrated with a problem at the beginning of the year and then got COMPLETELY side-tracked with an entirely different, non-font endeavour (camping!). Tonight is my very first time opening up my fonts again in all this time, and endeavouring to resolve that problem that left me stuck at the beginning of the year.

Do you sell your fonts ?

Actually, I've been thinking that I might just give them away, once they're finished (if I can ever get them finished!) -- I just don't know how lucrative it would be to sell these, hardly anyone would be very interested in them, and so how much would I make? $10/month, if I'm lucky? I really have no idea, actually. I know a "world-class" type designer who has designed fonts that are used by greeting card companies and all sorts of other big-time publishers, I see her fonts used all over the place -- just just greeting cards, but books, album covers, and all sorts of other things -- and she told me once that she only makes about $40/month off sales of them.

Yikes! What the heck is the point? I guess the only point, really, is to do it for the love of it -- although I would be more than happy to stand corrected on that, if indeed one can actually make reasonable money off selling one's fonts.