I'm trying to make a set of decorative initials, based on some woodcuts of Hans Holbein, except I've swapped out the initials of my own font in place of those in his originals, then copied those from Photoshop into FontCreator.

Everything's done, except I can't seem to get the font to validate! I had a whole bunch of them with zillions of errors, so I tried various things, like "Smooth Curves," and "Smooth and Align Curves," and "Optimize," and apart from those, one thing that seemed to get rid of a lot of the errors in many of the glyphs was "Join Contours -> Union." I'm not even sure why I ended up with separate contours in that sense, because I'd basically just copied/pasted a whole, single image from Photoshop into FC, and only re-sized it larger (I could see something screwy happening with the countours if I'd decreased the size, though -- but enlarging?).

But for just three of the glyphs, when I try to "join contours," I keep getting this message...

Operation failed: too many or too complex contours (Error E8139

Also, when I validate, I get a whole pile of things, but when I look at the glyphs I don't see the usual red "x" here and there pointing me to where I should go look for something. These are all fairly intricate woodcuts (i.e. the originals), but still, I've got almost the entire alphabet validating okay, it's just those few that I just can't figure out.

Any suggestions? Don't know if it matters, but here's a screenshot of one of the problematic glyphs, just to give you an idea of the "complexities" of it (although the entire alphabet -- uppercase only, of course -- is as complex as this one)... 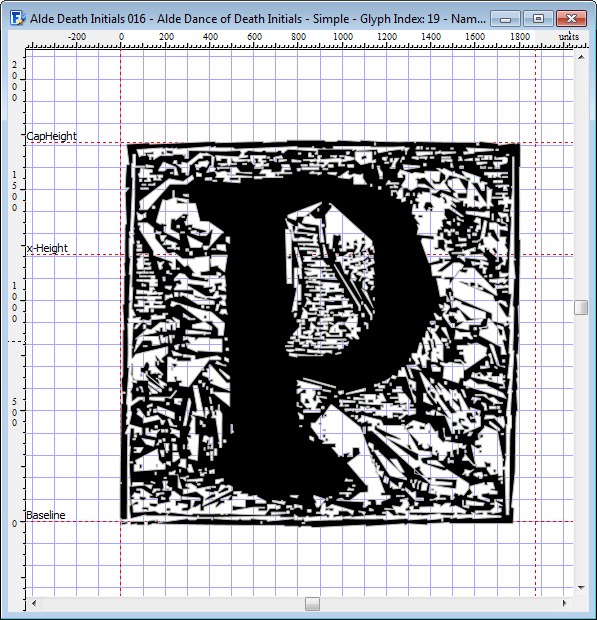