In the Support forum is the following thread.

As a result of that thread there is a small font HIGHM003.TTF which has glyphs for the following emoji.

This thread is so that the font is mentioned in the Gallery in case the font might be of use to some readers.

An interesting aspect of the font is the way that WordPad stores the characters in a Unicode Text Document.

The file 12345rainbow.txt was produced using WordPad on a PC running Windows xp professional, using Save As... with the file type as Unicode Text Document. 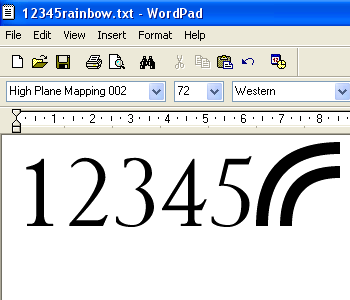 The text which I keyed is the five digits 1 through to 5 followed by U+FE00D RAINBOW, which was entered using Alt 1040397 in WordPad.

This is a total of six Unicode characters.

Sixteen bytes are used in the 12345rainbow.txt file.

Expressed as pairs of bytes, these bytes are as follows, in hexadecimal notation.

(Note, text files can be expressed in various ways, the U+FEFF can optionally be used to distinguish between two ways of expressing text in UTF-16 format.)

The one followed by 16 zeros can be expressed as a 20 bit number by adding 3 zeros at the front.

I have added the leading zeros because otherwise this web page might display with the addition shown below not aligned correctly on the page.

Adding the two numbers together.

Expressing that number in hexadecimal gives FE00D thus meaning that U+FE00D is the character which is represented.

I noticed that one of the emoji is ROASTED SWEET POTATO and I wondered if I could make a good glyph design by recycling some heat lines which I used in my Hot Beverage font, which was made using the Softy program back in 2003.

The Hot Beverage font was my first published font. It is still available on the web at the following web page.

Here is a transcript of the notes which I made, using WordPad, while I was making the High Plane Mapping 004 font.

Use Tools AutoNaming... to change the name to High Plane Mapping 004.

Try to add another glyph to the font in plane 15.

Insert a cell after the rainbow glyph as U+FE974 is after U+FE00D.

Map the cell, using the Microsoft Unicode full repertoire platform to be U+FE974.

Copy the heat lines from the glyph.

Move the heat lines down by 256 font units.

Move the right heat line to the right by 128 font units.

Move the lowest point of each heat line up by one font unit.

Draw a shape to represent a sweet potato.

Try the font in WordPad on this PC which has Windows xp professional.

When I saw the post I decided to try to make a font which could be used to support experiments using the suggestion in that post.

The font also contains the following glyphs for emoji.

The only facility which I have, as far as I know, which will handle the code points from higher Unicode planes is WordPad, yet I have managed to get some interesting results using WordPad with Alt codes and saving as Unicode Text Document.

The font was produced by adding the capability to handle non-BMP code points and the extra glyphs to a copy of my Poetry font.

Here is a transcript of the notes which I made while I made the font.

Change the .notdef glyph to a copy of the one in the Quest text font.

From the http://www.unicode.org/charts/symbols.html web page, obtain a copy of the Tags code chart.

Follow the instructions which are in the "How to add characters defined in the Supplementary Planes..." thread to which Erwin referred me.

Now update the range settings on the Ranges page on the Font Settings window (Format -> Settings). Here set the Contents and Layout version to 3. then select the 'Edit' button within the Unicode Character Ranges area. Check 'Non-Plane 0 - implies that...' and press the 'OK' button.

Copy the glyphs for NIGHT WITH STARS, RAINBOW and ROASTED SWEET POTATO from HIGHM004.TTF.

Alter the background for NIGHT WITH STARS to make it go up to 2048 font units.
Put the screen resolution back to 800 by 600.

Try a glyph for U+E007F CANCEL TAG by adapting a copy of the glyph for b.

Try to find a Private Use Area codepoint at or down from U+FFFF2 which ends in 2 and which has an Alt code which also ends in 2.

Add a glyph for U+FFFF2.

Design a glyph to represent U+FFFF2 PRIVATE USE AREA TAG by adapting a copy of the glyph for U+E0001.

There is information about tags in the following document.

I hope that the attached font will useful in any experiments on the topic which people choose to carry out.

Some readers may not be aware that Tags have been deprecated by the Unicode Consortium, though they are still in the specification. I mention the deprecation so that readers know of that situation.

In the event, in the circumstances of the facilities available to me, a special font based on the HIGHM004.TTF font was needed.

I decided to add the new Unicode 6.0 mappings to the three emoji glyphs that have been used in these experiments.

The name of this thread is "Font with some Emoji in a high plane Private Use Area" yet I mention, for the avoidance of doubt by anyone who is learning and reading this thread, that the Unicode 6.0 mappings are not in a Private Use Area at all, so to that extent this post is off-topic in this thread.

Yet it did seem that, as the Unicode 6.0 mappings of the glyphs are now formally encoded and published, that it would be good to add the Unicode 6.0 mappings. Also, this is the first font where I have added glyphs mapped to plane 1 into a font, so there is a learning experience for me as well. Also, a font with regular mappings for three of the emoji might be a useful font for some people to have in their toolkits for testing software packages.

The mapping data is obtained from the following document.

For information, the Alt codes, for trying out the font using Microsoft WordPad, are as follows.