I have experimented further with the 3D model.

Here is an image of the sculpture on a plinth. 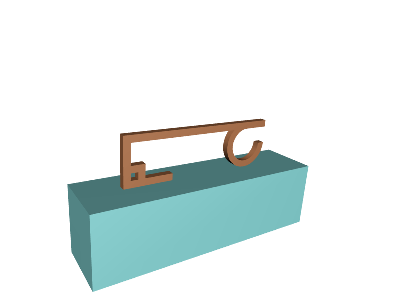 locse027.pdf
The one hundred and fifty-eight mapped symbol glyphs of the Localizable Sentences 027 font and localizations into English en-gb-oed text.
(26.29 KiB) Downloaded 520 times

Here is an additional document that I produced last week.

I was recently sent the following link.

The page includes a link to the following page.

As a result of reading about QR codes and thinking of how they can be applied, I thought of an idea about using QR codes, an idea that may possibly be a new idea, an idea that is not about localization.

At present I regard this idea as spin-off from my research on communication through the language barrier.

Anyway, here is a research document that I have produced. Maybe it could lead to a new thread about producing a font with QR code glyphs for individual characters.

a_simulation_about_an_idea_that_would_use_qr_codes.pdf
A simulation about an idea that would use QR codes.
(20.14 KiB) Downloaded 471 times

In that post is an attachment named as follows.

This font has 140 more mapped glyphs than the Localizable Sentences 027 font, mapped from U+EA60 through to U+EAEB.

The 139 cells mapped from U+EA61 through to U+EAEB each contain a glyph that is hopefully capable of being understandable both by people and by an appropriate computer vision system, though a computer vision system programmed to read these symbols does not, as far as I know, exist at the time of writing this text.

One particular application area that I am thinking about is the possibility of text-based road signs such as NEW ROAD LAYOUT AHEAD and ROAD AHEAD CLOSED could carry such a symbol in the lower left corner of the sign so as to assist automated localization into the language of a driver visiting from a country where English is not the native language, for example by using a speech synthesis system in the cab of the lorry that he or she is driving.

In the United Kingdom, the signs NEW ROAD LAYOUT AHEAD and ROAD AHEAD CLOSED have white text upon a red background, which is the reason for the colours used in the example029.png graphic.

Save as LOCSE029.TTF Localizable Sentences 029

Set the advance with to 2048 font units.

U+ED00 If you are able to stand, could you please stand.

The design of these two glyphs was an interesting situation.

All of the previous glyphs for localizable sentences each encoded as a single character in this experiment in communication through the language barrier had been in a cell with an advance width of 6144 font units (=24 x 256) and had a glyph width of 5888 font units (= 23 x 256) with a structure built around sections, of widths, in units of 256 font units, of 7, 1, 7, 1, 7. This has proved useful for being able to have the leftmost section indicating to which group of related glyphs the particular glyph belongs, with detail being in the centre and righmost wider sections.

However, I thought that such quite complicated design glyphs, which would usually not be analysed by an end user of an implemented system (if such an implementation is ever built), would not be best for symbols that would be displayed with the intention that people would know their meaning by looking at them. So I made these two glyphs 1792 font units wide (= 7 x 256) in a cell with an advance width of 2048 font units (=8 * 256 font units).

This allowed simpler designs to be used for these two glyphs.

This post contains a font. The next post in this thread contains a later version of the font.

If experimenting please use the later font. No mappings have changed, just the glyph designs of the ten localizable digits for use solely within localizable sentence markup bubbles so as to make them more readable by humans.

Some readers may have noticed the thread on Encoding Localizable Sentences that is running in the Unicode mailing list at the present time.

The posts are archived and the archive can be accessed on the web.

In that post, which as it happens includes a link to a post earlier in this present thread, I wrote as follows.

I have now produced the new version of the font to which I referred.

I have made the designs for the two localizable sentence markup bubble brackets deliberately not horizontal mirror images of each other in case that might cause problems if intermixing them within right to left scripts. I do not know enough of right to left scripts to know if there would be a problem, so I thought that I would seek to design the glyphs so as to avoid any problems that might arise.

William wrote:
I have now produced the new version of the font to which I referred.


I tried using the Localizable Sentences 032 font in the production of documents for simulation 6 and simulation 7.

Although the font worked well, nevertheless I found the results somewhat hard to read. I was trying to have a 'computer-look' effect.

So I have redesigned the glyphs for the ten localizable digits for use solely within localizable sentence markup bubbles. They are not so wide now. Hopefully they are now easier to read yet still have a 'computer-look' effect. The mappings are unchanged.

There has been no change at all to the glyphs or the mappings of the two localizable sentence markup bubble brackets.

This means that the brackets and the digits do not have the same advance width anymore.

I particularly want the brackets to have square glyphs.

Here is the new font.

I have now produced Simulation 6.

In the event, research has progressed and Simulation 7 does not, in fact, simulate the scenario that I had in mind at the time that I wrote the above note.

I have submitted a proposal to the Unicode Technical Committee with the following title.

The document is available from a link labelled L2/13-079 on the following web page.

The meeting of the Unicode Technical Committee is due to take place from 6 May 2013 through to 10 May 2013 at San José in California.

A person can send in comments on the proposal and request if he or she so chooses. I think that comments will be listed in the Current UTC Document Register 2013 page and be available for public viewing. The first page linked below lists an email address to which one may send an email with a pdf as an attachment to the email. The second page linked below includes a form and is for typed text only.

Here is a new research publication.

Communication_through_the_language_barrier_in_some_particular_circumstances_by_means_of_encoded_localizable_sentences.pdf
Communication through the language barrier in some particular circumstances by means of encoded localizable sentences
(47.85 KiB) Downloaded 318 times

Here is another new research publication.

The following has been of great value in my research.

William wrote:The following has been of great value in my research.

The ubiquitous IrfanView includes a feature named HEXView (accessed via the F3 function key) but it's nice to see an 'in-house' solution.