I just came across a problem on the Serif PagePlus forums. A users was trying to kern Adobe's Minion Pro font. On checking, I see that it contains GPOS OpenType tables, but no KERN values when opened in FontCreator's Kerning dialogue.

PagePlus doesn't support GPOS kerning, and neither does FontCreator's OpenType feature editor yet. 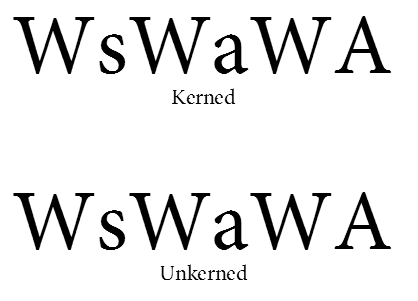 The question is, how common are fonts like Adobe's with only GPOS kerning and no KERN table? I already found that the Linux Libertine font is the same.

LibreOffice also doesn't support GPOS kerning as far as I can tell, and it seems that InDesign doesn't either. Do most other applications support GPOS kerning, and is it the preferred method for some reason? Adobe are a major font foundry, but Calibri and many other fonts do contain KERN tables. It doesn't seem like a good plan to rely on GPOS tables if only a few applications support them. 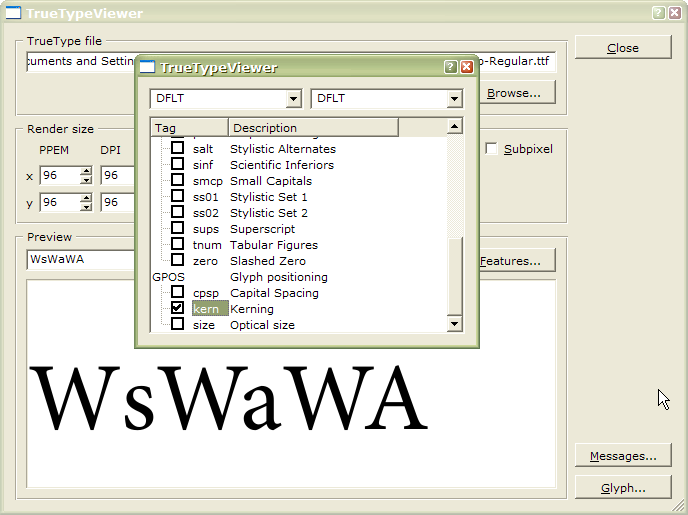 No, InDesign and Quark use GPOS tables.

In the case of the Ws pair, it is simply not in the Minion font.

The screen shots are from ID and Quark. The two pairs are clearly using GPOS, the Ws pair isn't defined.

Thanks. Does GPOS kerning work OK in older versions of Word too, or only in Word 2010 or later? Relying on GPOS kerning seems like a risky strategy, since so few applications support OpenType features at all.
My Fonts • Reviews: MainType • Font Creator • Help • FC13 Pro + MT9.0 @ Win10 1909 build 18363.836
Top

I don't have an earlier version of Word installed here, just 2010. Turning kerning on is in the font dialog for a given style. Turning it on using our Minion Pro as an example shows the same kerning as ID/QXP.