Would it be possible to make the manual kerning pairs like the preview where you can place a glyph on either side of a character, so you could do for example " N A N "instead of just a pair as is now example "N A" this would greatly speed up the process when having to manually kern, also an option to kern all possibilities so you don't have to keep toggling between new and the kerning, very annoying after several hundred pairs of manually kerning a font. I know you have auto kern, but I have yet gotten it to kern as good as manually kerning it myself.

With the current glyph displayed in a Glyph Edit window, you can choose 'View > Toolbars > Comparison' (F11) to display the Comparison toolbar. Type in the text to be displayed before and after the selected glyph, and toggle kerning on and off to see the effect of your efforts.

Yes, I know about the comparison tool bar, love it, but wish this feature could be put into manual kerning, it would allow much faster kerning if you could do both the left and right kerning at the same time. VersaCad had this feature available back in 1989, made it a breeze to quick kern a font manually.
Top

I understand now; I misinterpreted your original post. Sorry about that!

I'm not certain triplets of letters works any better than pairs. There is no spacing (kerning) relationship between NA and AN, or even TA and AT. Case kerning isn't logical in threes: PaP, aTa, etc. You still have two decisions to make. Whenever there are spacing problems using the kerned font, you will fix the pairs which need adjusting, not the triplet.

With auto-kerning you get a large number of illogical combinations, some obviously incorrect pairs and a whole bunch of close enough pairs.
Top

In response to the last reply, I have spent hours at a time kerning fonts in various programs I have used to do the work I need to do with fonts and spacing between letters. And for me from over 30 years experience I have found for basic manual kerning the program I like and found fastest and easiest to kern were the ones where you had the 3 letters "nAn" at a time kern left and kern right, a lot faster than what is present in this program. 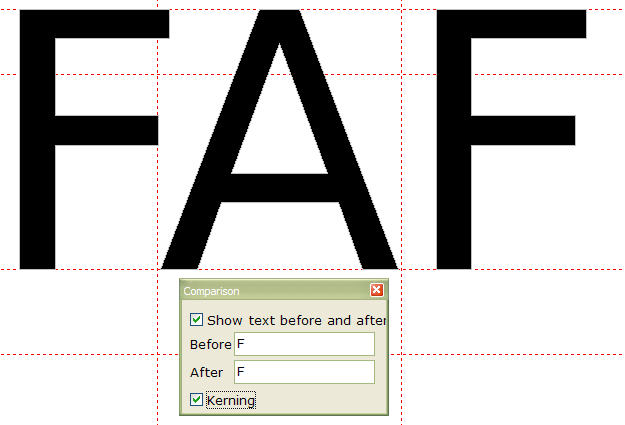 It would save time when kerning a pair like TA ,if matching kerning pairs were automatically added for TÁ, TÀ, TÄ, TÃ, and also ṬA, ṬĀ, etc. That would make sense as only in a few cases would the pairs need further adjustment, e.g. Ta and Tà might need different values.
My Fonts • Reviews: MainType • Font Creator • Help • FC12 Pro + MT9.0 @ Win10 1909 build 18363.592
Top

Just like in your above example of the jpeg, I know that "AFA would kern different left and right of the center letter, but instead of just being able to kern a pair of letters would it be possible to program it so that you could kern 3 letters at a time and apply / save the kerning like you can only now do with one pair. Right now I manual kern all pairs even with auto kerning on, for example I will do kern pairs as the manual program is now set up "LA", "AL" if I could do "LAL" kerning keft and right at the same time I could reduce my kerning time in half, cause I would not have to go new kern half as much the way it is now set up in the program.

Attached is an OTF font I developed for Monumental Sandblast lettering it is a font that would be used from 2 1/2"-3" in size. The letter style contain a sunk letter outline with a frosted letter in the center.

I wonder why most of the glyphs have a large negative side-bearing. If you fix your side-bearings first, you won't need to use kerning on most glyph pairs.

Been using this program for a short time what do you mean by " negative side -bearing, adjust the side -bearings', anything to get the font to auto kern better would be a great help.
Top

The left-side bearing on most of the glyphs in your font are negative. That would be normal for a combining accent that is designed to sit on top of the preceding glyph, or for a swash or italic f that curls under the preceding character, but it's not usual. Most regular fonts will have left and right side-bearigns that are approximately equal — maybe they will be bigger for a letter like lowercase i or ll than for a Capital A or W.

Reviewed above post about kerning and character positioning being negative on left side of characters, have adjusted each character so that the left edge starts at zero and adjusted right side, did auto kern, then manual kern on some of the pairs, looks better under test for ttf, still learning how to use program. Attached is a revised TTF 25FO Modified Roman font saved as TTF so I can import into my Gerber Graphix Advantage Program. This font is used in the Monument Industry at 2 1/2" for sandblasting into Granite which would show as a frosted letter with a sunk outline on a polish surface.

Glad to see you keep improving the features. Still wish I could manual kern left and right at the same time instead of just two characters example A|Z|A instead of just Z|A as it is now and has been in the past versions, this would greatly speed up manual kerning.