Before asking a question on FontCreator look here for possible solutions and tutorials. Please do not post support requests here.
Post Reply
44 posts

As this thread is getting rather long, I have added a Table of Contents

The topic has been updated for FontCreator 13 by removing some tips that are now out of date.

On some glyphs, like the capital E illustrated below, this looks off centre because the visual centre is a long way from the geometric centre. 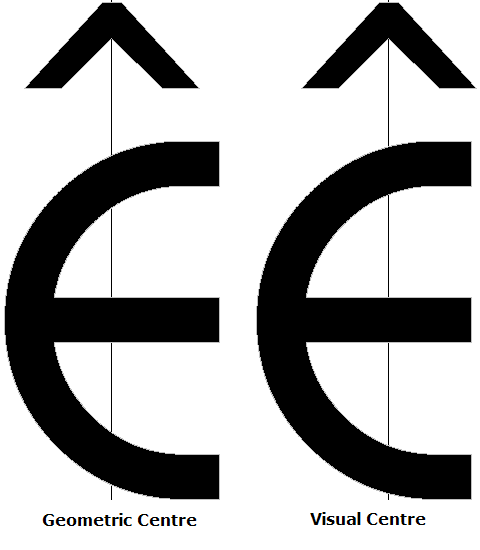 To adjust the geometric centre of the capital E so that it aligns with its visual centre one can add a single node contour. (Single node, or two node contours won't print. We can use them at the design stage and remove them later by using the font validation wizard). Insert a rectangle from the Drawing toolbar, select three nodes and delete them to leave a single node contour. 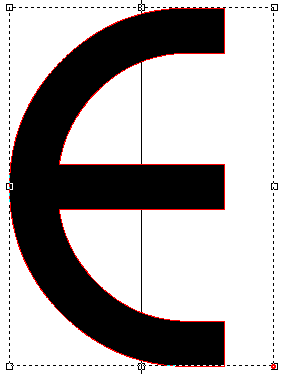 Now, when you use Complete Composites, the accents will be aligned optically rather than geometrically, and all other accents over or under the Capital E will be correctly aligned too, because the geometric centre has moved. One can also move the geometric centre of accents in exactly the same way by adding a single node contour. 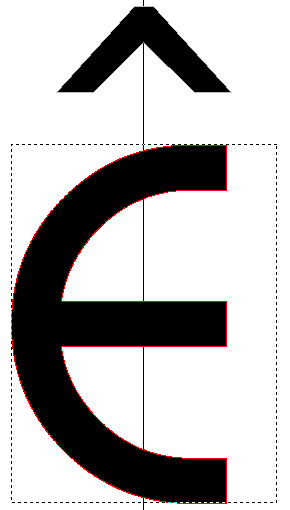 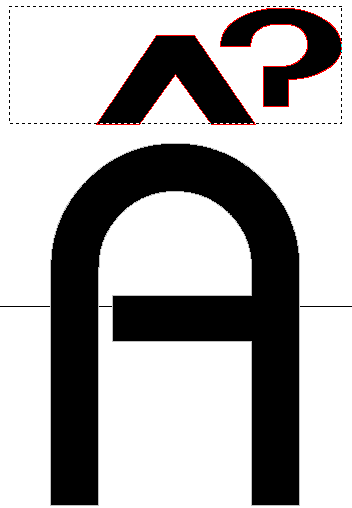 Now, you can easily see if the spacing and kerning are right, and if the design works aesthetically or not in a line of text.

Here is the same text with Pali Italic.

The sp ligature uses the "p" and "s" from the regular type style, not the italic typestyle

Oh well! Back to the drawing board.

After Making a Few Corrections

Sometimes you don't know the precise angle to use in the Glyph Transform wizard, or the amount of skew to use on the Transform Toolbar. The easiest method is to use the skew handles. Select a contour or several contours with marquee or shift select, and click the selection again to get the skew and rotate handles when you mouse over the selection handles. Carefully grab the skew handle and skew the selection as you wish. 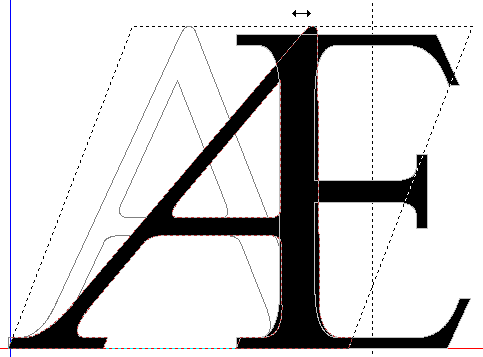 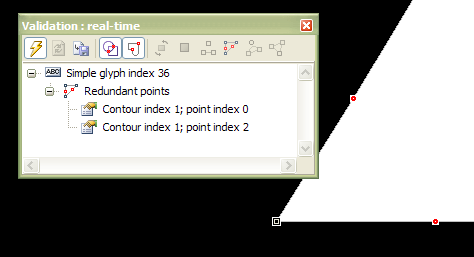 Press the "F" shortcut to convert the middle node to an off-curve node. 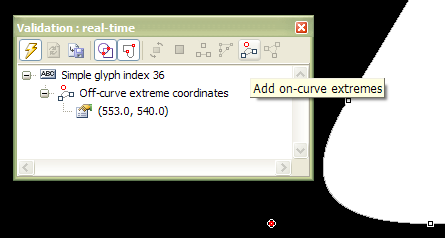 Now the Validation Toolbar shows a different error — the off-curve node is an off-curve extreme. Click the "Add on-curve extremes" button on the validation toolbar to correct this problem. 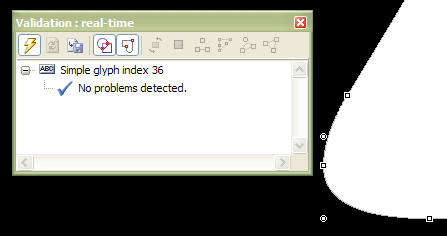 Stage 1
Draw a rectangle, select all and centre align middle. 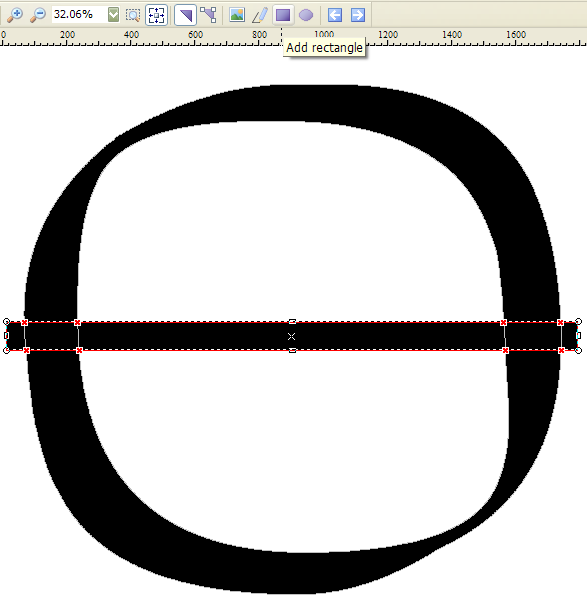 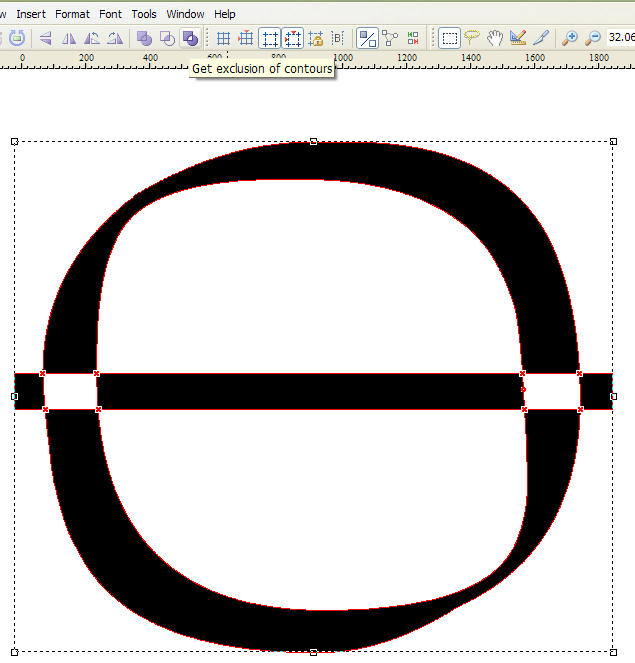 Stage 3
Drag select with the mouse to select the three offcuts, and press delete. 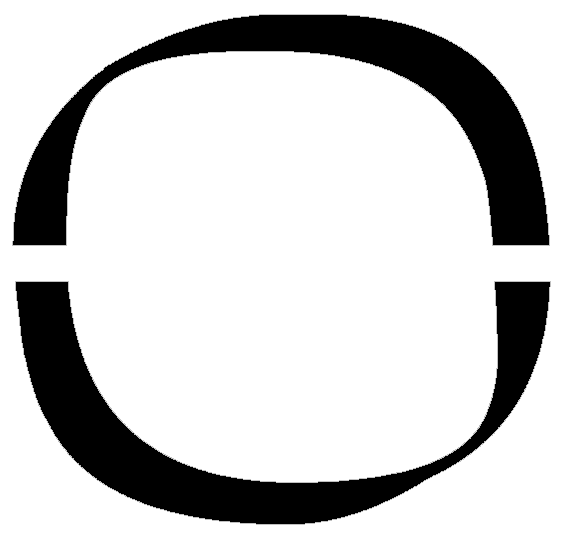 In the latest version of FontCreator one can simply drag the centre of the line, but one will still have to fix off-curve extremes, so this method is still useful to know. 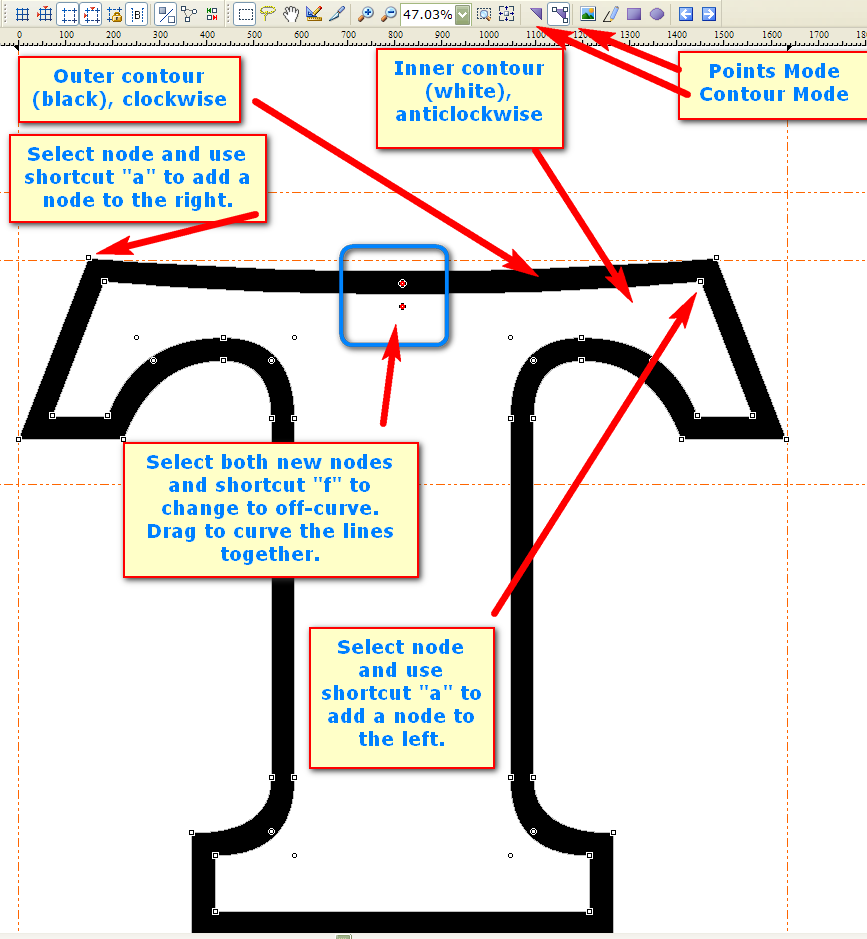 However, composite glyphs can be created by selecting the glyph members in the glyph overview, copying them to the clipboard, then pasting them into the empty glyph where you wish to create the composite glyph.

To speed up the process of creating all ten denominators from the ten superscripts, copy them all at once, paste them all into the target glyph, then delete those you don't need.

Step One
Select all ten superscript glyphs in the glyph overview using Shift + Click, and Ctrl + Click. They will probably be in the order: 2,3,1,0,4,6,7,8,9 if the font is sorted in the standard order.

Step Two
Insert ten empty glyphs at the end of the font. Denominators intended for use with OpenType Features don't need to be mapped. Or, you can map them to code-points in the Private Use Area.

Open the first empty glyph and paste the ten superscripts from the clipboard. You will see a confused mess of glyphs like this: 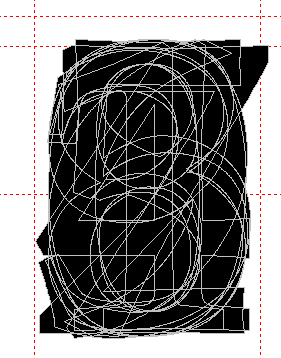 To select the superscript zero cycle through the composite glyph members using the "w" shortcut key — the zero, which is the fourth on the clipboard will be selected with three presses of the shortcut key. Holding shift, press the down cursor about five times to separate the selected glyph from the group. If you get the wrong one at first, try again until the target glyph is separated from the group and in the right position on the baseline like this: 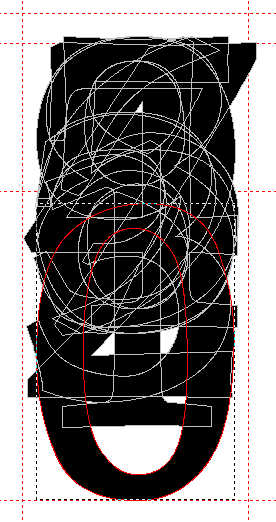 Use the shortcut key "Ctrl T" to invert the selection to get this: 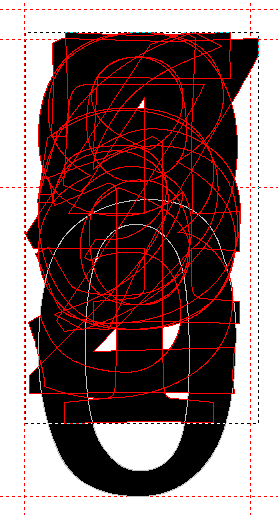 Press the delete key to delete the selected glyphs, and use the shortcut Alt Right cursor to move to the next glyph. Paste the clipboard contents again (Ctrl V), and repeat the process for the next denominator.

Using composites instead of simple glyphs reduces the size of the TrueType font file and makes the font easier to edit. If you later decide that the superscripts need to be bolder, for example, you only need to edit the superscripts, for the subscripts and denominators to be updated too.

Update: If a large numbers of glyphs are pasted, disable Automatic validation, and hide the Glyph Fills (shortcut Ctrl H in FontCreator 9.0.0.1916). Fill Outlines is a global setting that affects all Glyph Edit Windows. 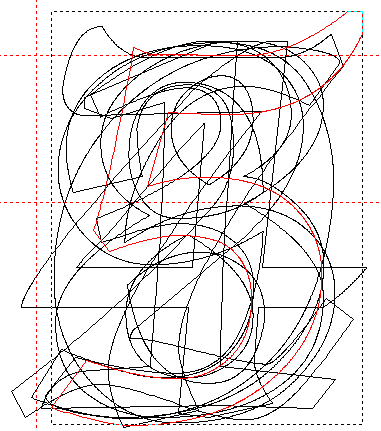 Re: Copy/Paste to Create Composites

Maximise working space by arranging undocked toolbars over the otherwise unused FontCreator Window Title Bar to the right of the Help Menu.

Drag the toolbars to the position shown by grabbing the bottom of the toolbar’s title to undock any docked toolbar leaving its title bar just outside of the monitor. This is much easier to do without a font loaded, or with a category selected that contains only a few glyphs — then the Font Overview will not need to be redrawn when toolbars are moved.

On a 1920 x 1080 monitor, the Grid, Align, Glyph, and Overview toolbars will fit on one row with a few pixels to spare. Floating Toolbars like the Transform Toolbar can be moved up into any free space on the Tab Bar.

After arranging the toolbars as you want them, right-click on any toolbar to lock the docked toolbars. The undocked toolbars will also be locked wherever you have positioned them, but they can redocked by double-clicking on their title bar.
My Fonts • Reviews: MainType • Font Creator • Help • FC14 Pro + MT11.0 @ Win 10 64-bit build 19043.1645
Top

The five tags used in the glyph overview panel can be renamed:

The Optical metrics feature is only available in the Professional Edition. This features calculates the optimal spacing for Basic Latin characters based on the character shape. If you add Small Capitals, Petite Capitals, or Superscript/Subscripts to your fonts, you might like to have FontCreator calculate the correct spacing for those glyphs too. Here's how to do it.

I sometimes want to recompose composite glyphs. Edit menu, Select Composites, Make Simple, Complete Composites is OK, but it is easy to lose the selection or one may want to exclude some composites from the process. Try this instead:
N.B. In FontCreator 10, the Tagging shortcuts (Ctrl+1 to Ctrl+5) now act as toggle keys.
My Fonts • Reviews: MainType • Font Creator • Help • FC14 Pro + MT11.0 @ Win 10 64-bit build 19043.1645
Top

In FontCreator 12, this can be automated by using the new Include in Exports Feature 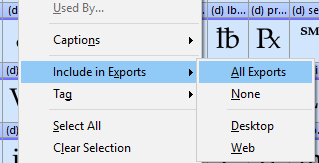 Any glyphs that are marked (d) for Include in Export to Desktop (otf/ttf) will be excluded when exporting fonts for the Web (woff). I still need OpenType versions of the smaller fonts. This tip may still be useful to users of earlier versions of FontCreator.

My fonts typically have about 2,000 to 3,000 glyphs, with many symbols and dingbats. While the size of the fonts is not a problem for desktop publishing applications, on the web it would be a significant issue. Even without hinting, my Kabala Regular WOFF font is 277 Kbytes (2,369 glyphs). By removing the Symbols, Arrows, Enclosed Alphanumerics, and Dingbats that can be reduced to 153 Kbytes — still a lot, but the glyph coverage includes Latin Extended A, Latin Extended Additional for Vietnamese, Basic Greek, etc., (1,495 glyphs). By removing the GPOS kerning tables, the file size is reduced to 86 Kbytes, which is much more reasonable for the web. 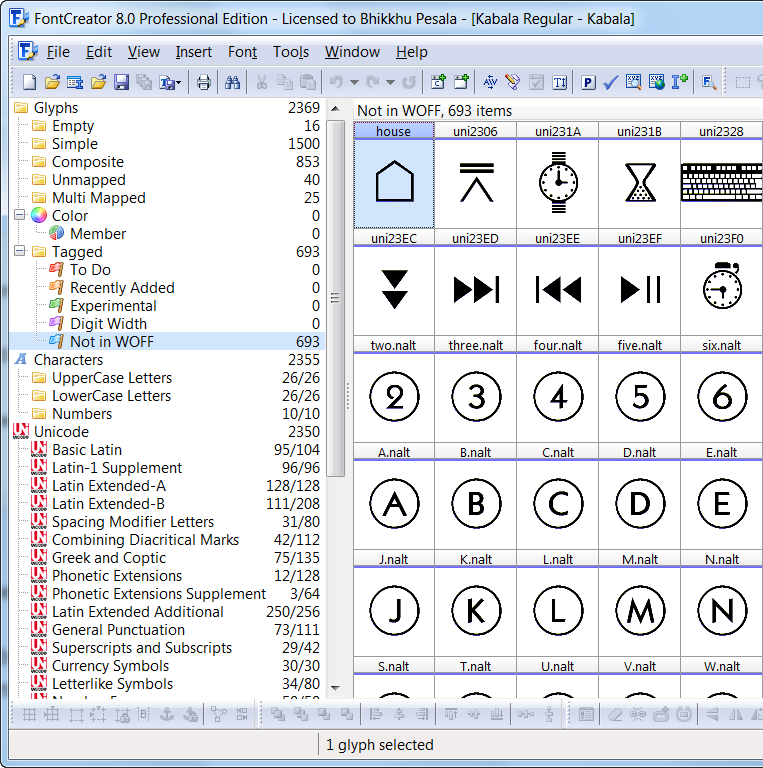