Get help with FontCreator here. Please do not post feature requests or bug reports here.
Post Reply
3 posts • Page 1 of 1

I've got a lot of fonts, and adding these manually as needed is going to prove to be a major pain. Can some-one familiar with the macro-language post up how to do these with a quick macro? (Just to be clear, I'm just looking at the insertion of characters, and no transposed glyphs or anything.)
Top

You can use the Insert Characters feature to add a bunch of codepoints. Of course the glyphs need outlines, but this should get you started.
Erwin Denissen
High-Logic
Proven Font Technology
Top

I moved your question to the support forum where it belongs.

There is a tutorial on using the Insert Character Feature.

To repeat the same process on several fonts, after selecting the characters in the dialogue, copy the string of code-points to the clipboard and save it to a text file. Then click on OK to add the characters to the font.

Save the clipboard as a text file for later reuse, and paste it into the dialogue.

The Standard or Professional Editions have the Glyph Transform wizard, which can do a better job of this, by save the character list as a script. One can then insert the characters, and complete composites in a single operation. 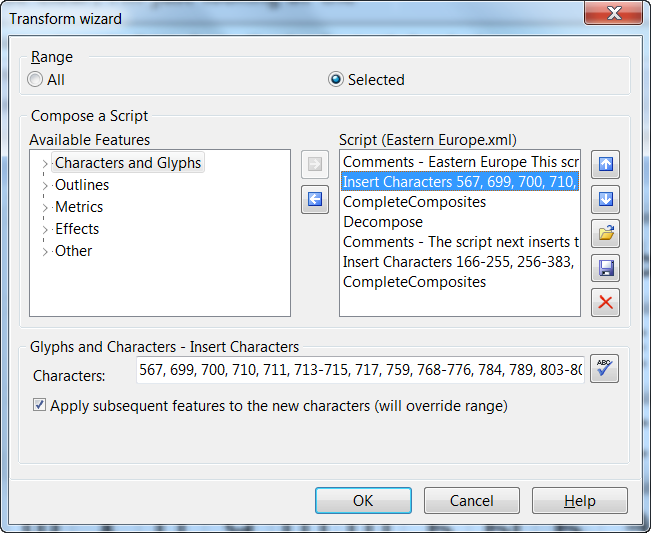