I have for some time been writing a novel based around my ideas on using encoded localizable sentences for communication through the language barrier.

Some readers of this thread may like Chapter 5 of the novel where there are a number of illustrations of symbols, each symbol designed by me and included in the PDF document by using a font that I made using Font Creator.

The illustrations are included direct from a font (that is, not by making a png graphic and embedding the graphic in the PDF document) and I used a Private Use Area mapping for the symbols.

I find it interesting that this is only possible because of the way that (many? all?) personal computer operating systems these days are designed so that fonts are all in a common font folder and application programs each use fonts from that common folder and that the same font formats are used by (many? all?) producers of software packages.

If any reader would like to have a look at the rest of the novel, there is a web page from which all the chapters and a few other files are linked, though most of the novel does not feature fonts and the novel also ranges over other topics as well as localizable sentences, yet maybe some readers might enjoy the novel and find interest in the topics that are mentioned.

I noticed the following web page.

On that web page is the following.

I also found the following.

Now certainly the encoding of that symbol is not being suggested as the encoding of a localizable sentence, yet I find it interesting to compare and contrast that symbol and its potential application for communication through the language barrier with the symbols that I am suggesting for communication through the language barrier. Certainly the symbols that I have suggested cannot be expressed in a personal encounter using a hand gesture, though they could be available printed on card, though that is not so convenient as a hand gesture.

Yet when sent as encoded symbols using an electronic communication link there are more similarities between the proposed U+1F91F and the symbols that I am suggesting.

Some readers might like to have a look at the idea for a movie in Chapter 17 of my novel where the symbols for communication through the language barrier would be printed on card. Could hand gestures be used there? Sometimes?

Going back to the symbol for the proposed U+1F91F character, given that there can be font variation in implementing symbol images I am wondering if a stylized graphic symbol might be useful in order to achieve a clear display on some mobile devices.

Some readers might like to have a look at this research document relating to localizable sentence technology that I have produced.

Note added on Friday 3 March 2017 mentioning that the size of the document is 36.59 kilobytes.
Top 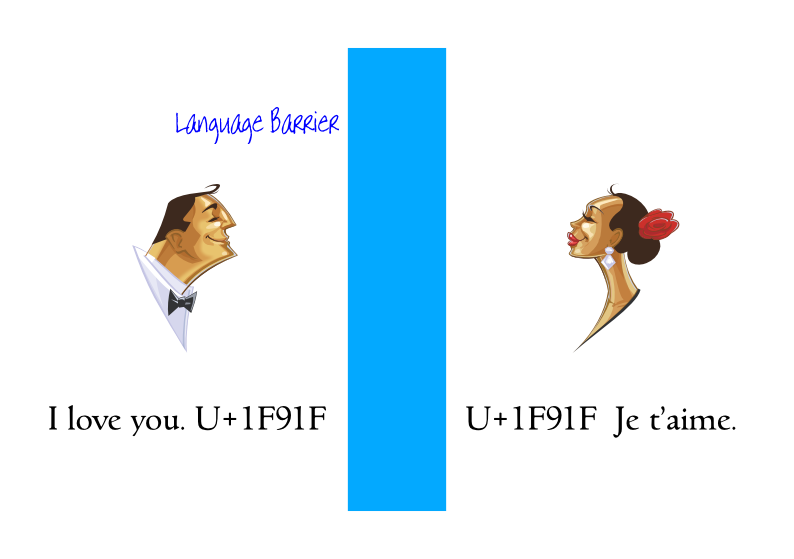 I produced the image using Serif DrawPlus X5 software and by adapting an image included in the DrawPlus X5 Gallery. The handwriting font is Annie BTN and the main text font is Goudita SF.

Link to the relevant code chart:

In order to produce that chapter I made a special experimental font. LOCSE936.TTF

This was started from a copy of LOCSE034.TTF, a font produced by me that is published on the web.

The 9 was because it was an out of sequence experimental font. It was not LOCSE935.TTF because that had been use for some other experimental purpose, I forget what.

Alas, I had not archived LOCSE936.TTF. I should have done but I had not done so. I often archive things not yet published by sending myself a webmail with the font as an attachment, so then I can recover things from my webmail account. However, for LOCSE936.TTF I had not.

So I decided to produce a font to have the same characters, matching a far as I could the additional glyphs of LOCSE936.TTF as conserved in the above linked document, which has all of them except the circled zero.

I decided to use a new font name Localizable Sentences 971 and file name LOCSE971.

I had thought of using LOCSE937.TTF but I chose to use LOCSE971.TTF in case I needed to iterate the design to get it right, which I may still need to do as I have only done a few checks thus far. Then I could use LOCSE972.TTF and so on as needed.

Fortunately LOCSE034.TTF had all of the digit character glyphs in the Private Use Area at U+ED80 through to U+ED89.

I adapted a copy of the glyph for O for the circle, which may possibly be what I did before.

I adapted a copy of the glyph for f for the integral sign, which is what I did before.

I made a print screen image of an enlarged part of the display of the above linked document, consisting of a display of the integral sign, three circled digits and a capital letter from the Goudita SF font used for the text in the publication so as to try to get the alignment correct.

I worked out that the digits sit on the baseline and the glyphs are 13 units high by 11 units wide, with the unit being 128 font units and that I needed to scale the digits glyphs by 50% both horizontally and vertically.

So here is the font.

If anyone can think of a way to check out how well the glyphs of the new font match the glyphs of the old font, perhaps detecting any differences between the two I would be interested to know of the technique and the results please. I am wondering particularly about the integral sign.

Here is a font with two symbols in it. They are my own designs. They are for Hi! and Bye!. They are intended for informal communication through the language barrier.

I have been using the symbols in the following thread to produce a design for a tote bag.