Get help with FontCreator here. Please do not post feature requests or bug reports here.
Locked
5 posts • Page 1 of 1

Please consult our Font Creator - Frequently Asked Questions page when you are looking for an answer to one (or more) of these questions:
Last edited by Erwin Denissen on Thu Nov 02, 2006 10:48 am, edited 1 time in total.
Erwin Denissen
High-Logic
Proven Font Technology
Top

Why don't quotation marks work in Word?
Word-processors often use autocorrect to convert straight quotes " and ' to typographical quotation marks “” and ‘’. If your font doesn't have these characters, you will see only rectangles instead. Make sure that your font contains all of the recommended glyphs

How do I move the black lines?
The black guidelines show the WinAscent and WinDescent for your font. These are calculated and cannot be changed by dragging them like the blue guidelines. Go to format, settings, metrics to calculate suitable metrics for your font, or to enter values manually.

How do I type Unicode characters?
Font Creator enables you to map glyphs to any Unicode character, but keyboard mapping is a function of the Operating System or the applications that you use. In Word, it is easy to assign a shortcut keystroke to any character in your font. For typing in other applications you may be able to switch languages, e.g. to a Greek keyboard layout, or US International. You can also create your own keyboard using the Microsoft Windows Keyboard Layout Creator.

Another option is to use a macro program that can record keystrokes. Hold down Alter, type the decimal codepoint, and save the macro with an easy to remember shortcut. Use shortcuts to type in any application that supports text entry with Alter + Codepoint, e.g. Alter 8356 = Italian Lira ₤, Alter 8539 = one eighth, ⅛

How is the Default Line-spacing Determined?
Use the Calculate button (maximum setting) on the Font Properties, Metrics Tab to ensure that all glyphs fit between WinAscent and WinDescent. (WinAscent = Ascender; WinDescent = Descender; Line Gap is not equal to Typo Line Gap)

Advance width
The width of a letter and its surrounding space; the space needed to set a line of text in a specific typeface. Some programs have tracking to adjust the typeface to make it set looser or tighter.
Bézier curve
Mathematical equations used to describe the shapes of characters in digital fonts. The Bézier curve was named after Pierre Bézier, a French computer scientist who developed the mathematical representation used to describe the curves. Type 1 fonts use cubic Bézier curves, whilst TrueType use a subset of the curves known as quadratic B-splines.
Character • A letter, symbol, or accent that is assigned a code-point so that it can be typed.
Code-point • A unique number assigned to a character.
Glyph • A graphical outline or letter form.
Contour • A closed curve of one or more that makes up a glyph.
Nodes • Points that define the curves that make a contour. Nodes may be on-curve or off-curve.
Composite Glyph • A glyph composed of two or more other glyphs. A base letter like a, for example, is often combined with an accent or diacritic like ¨ diaeresis) to form a composite glyph like ä (a diaeresis)
Composite Glyph Member • One of the glyphs used by a composite glyph or by several composite glyphs. Some composite glyph members may be characters in their own right, or they may simply be included in a font for composing composite glyphs.
Offset • The distance that a composite glyph member is offset vertically or horizontally when used in a composite glyph.
Diacritic • An accent
F-unit • The smallest unit used in font design. Many fonts are designed at 2,048 funits/em.
Em-square • The square within which most letters are designed to fit. Script letter forms or combining diacritical marks may overlap the em-square. 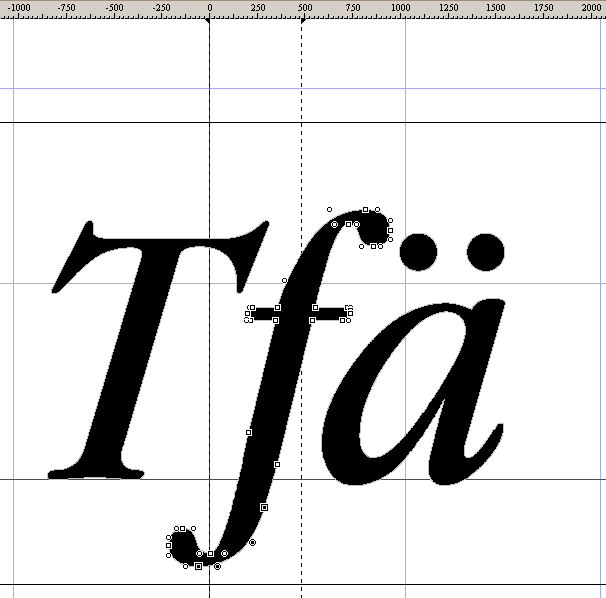 • The arm of the T overlaps the em-square to the right, and the bottom of the italic ƒ overlaps the em-square to the left.
• Four nodes are selected — two on-curve, and two off-curve nodes.
• The blue grid is set at 1024 f-units so four small squares make one em-square.
• The composite glyph ä (a diaeresis, code-point 228) is composed of the glyph of the character a (code-point 97) and the diacritic ¨ (diaeresis, code-point 168).
• The right side-bearing of the italic ƒ is shown as a dotted line.
• The capital T sits neatly on the baseline, while the descender of the italic ƒ descends almost to the Win-Descent line.
• The space above the glyphs to the Win-Ascent will be occupied by diacritics of capital letters like Ä (A diaeresis, code-point 196).
Last edited by Bhikkhu Pesala on Tue Jun 27, 2006 7:48 am, edited 2 times in total.
Top

Converting Regular Fonts to Bold or Italic
(from the online manual)

To change the font type (for example from Regular to Bold) you need to change a few settings:

When I test my font some characters show up as rectangles

FontCreator 9 allows you to test fonts during the trial period within the Font Test dialog, but the auto hinting option will only be applied with a registered copy.

You can also test your font within FontCreator by using the Preview Toolbar (shortcut F8). This now supports OpenType Features and kerning, which the Font Test window does not.