Post your bug reports here. Include information that helps us to understand and reproduce the bug.
Post Reply
13 posts • Page 1 of 1

Hello.
I'm not sure if there is a simple setting responsible, but when I clicked on the "Help" button (from within the OpenType Designer dialogue box), I cannot see any of the images that are supposed to be present. I see the text, but all images are replaced with the classic 'box with a cross in it'. See screenshot attached hereto. 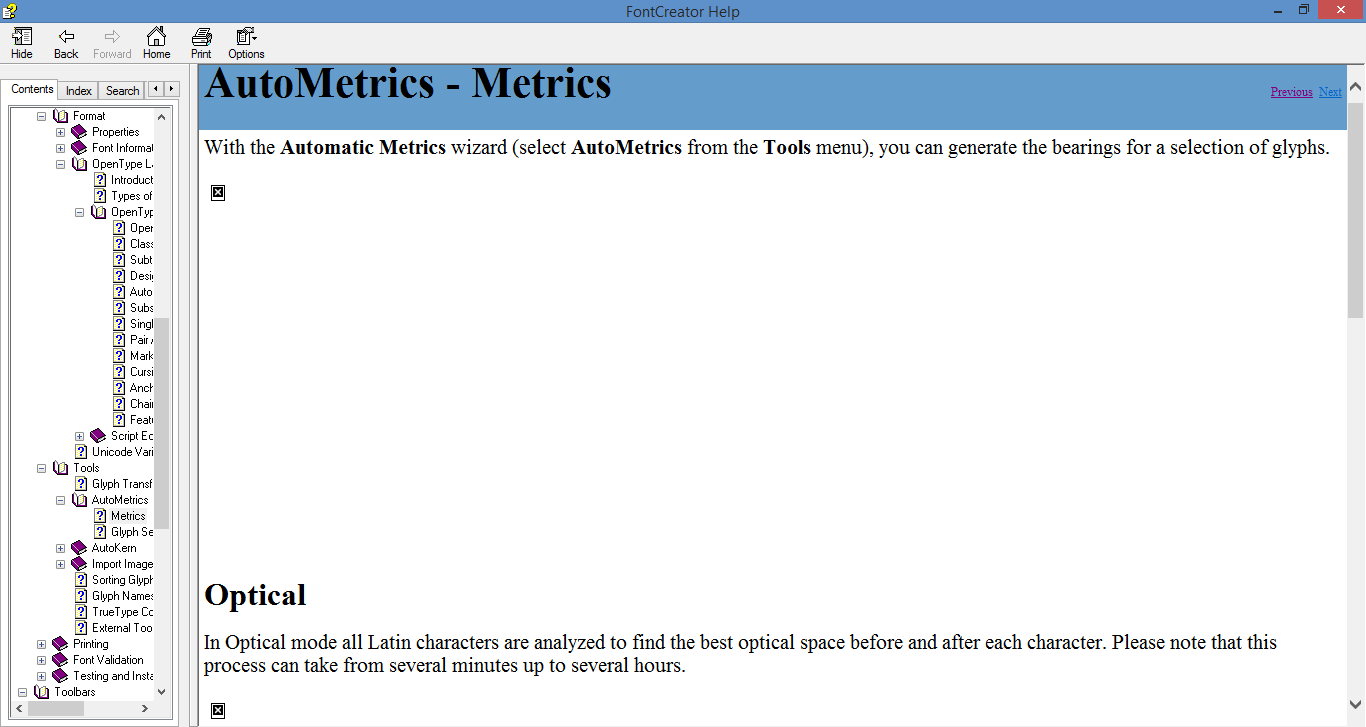 The images are there for me on Windows 10 in the help file with the latest build 2430 of FontCreator 11.5.

Are all images missing from help?

Yes, all images, every instance, in FontCreator's Help browser.
I just chose the page in the screenshot because it shows two images missing. It was not the page that first opened up, given the context I mentioned.

The online help accessed through an internet browser is fine.

Open Options from Help and check your Internet Options to see if Images are blocked. 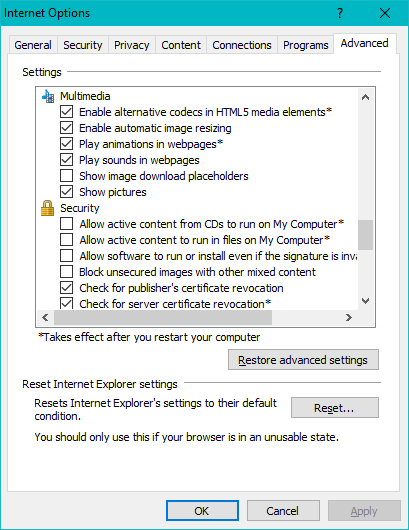 Does this updated manual work for you:

Hi, Bhikkhu Pesala.
As far as I can see, there is no blocking of the images due to my internet settings, accessed from FontCreator's Help Browser under Options > Internet Options > Advanced > Multimedia ... 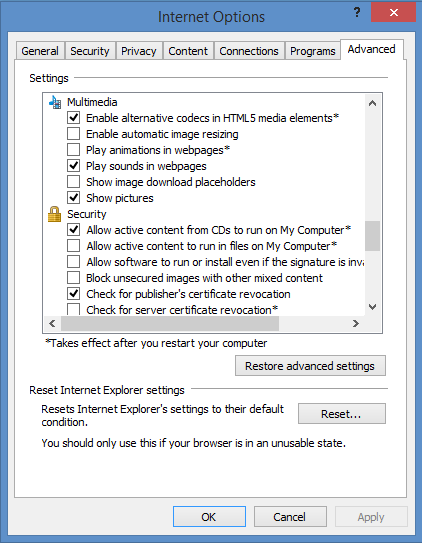 Hello, Erwin Denissen.
Thank-you for supplying an updated file.
I am not sure whether I have 'installed' it correctly. First I closed FontCreator. I renamed the original help file, and copied the updated help file you provided into the FontCreator directory. It is unfortunate that this does not seem to have solved the problem for me.

By the way, if I open the archives (using 7-Zip), I can see that the images are present in both the original help file and the updated help file, and I can view those images with a third-party viewer (IrfanView).

From the Windows File Explorer I can also 'directly' open the help file using "Microsoft® HTML Help Executable". However all images are still missing. Apparently this is the same help viewer that is called by FontCreator actually, so it makes sense that the result would be identical. What else to add? This "Microsoft® HTML Help Executable" is version 6.3.9600.17415 (dated 2014-11-21). Perhaps it is somehow out of date??

Of maybe some other system/security setting is affecting the image display?

Perhaps the FontCreator.chm files (original and updated) are OK: I can view them correctly, with all images displayed, using a different help viewer, namely Sumatra PDF.
Top

It does seem to be a more general problem with the "Microsoft® HTML Help Executable" help viewer on my system.
I can't say if this is a new or an old problem.
I'm sure there could be numerous possible causes.
From a quick look I found one idea is reregistering appropriate DLL and OCX files; I'm not expert in that, so I cannot tell if it is relevant to my issue.
Another possibility is that Kaspersky Internet Security might be interfering, as I've found the current engine (version 19.x) can be intrusive. Maybe it (or something else) is blocking JavaScript that would be necessary to display most images??? 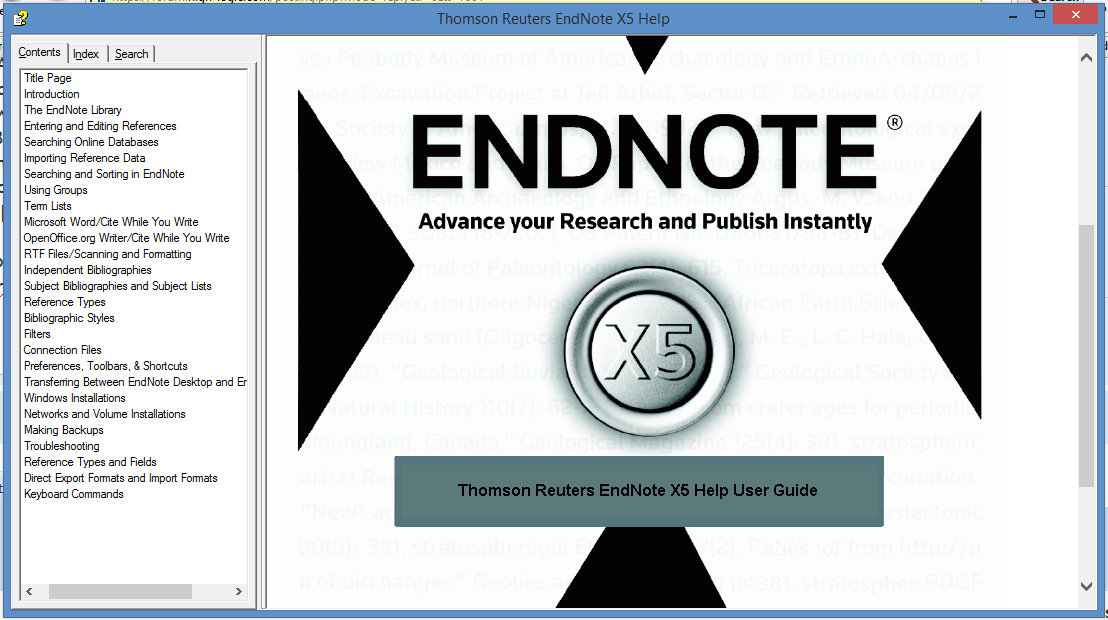 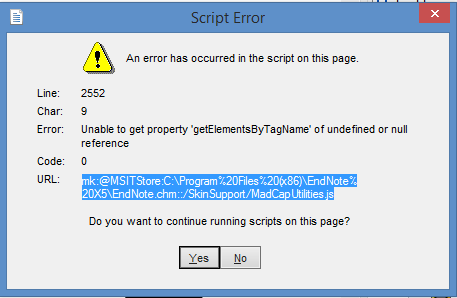 We're glad to know it is not an issue on our side, but we hope you will be able to solve it soon.

Thanks.
It seems to be an erratic problem — always the hardest to diagnose.

Not technically "off topic" as per the title, but not specifically related to FontCreator or other High-Logic products.
At this point I discovered that there was something wrong with my display: (i) ColorCop was displaying magnified views that didn't match the original view, and (ii) when loading a page in Internet Explorer, an image of ColorCop was momentarily flickered into view, despite that tool having been already closed down.
Update: In hindsight one other clue was that (iii) the hotkey combination Alt-PrtScn, to take a screenshot of the active (top) window, had stopped working too.

Hence I decided to RESTART Windows. Hey presto, when I logged back in everything was working again. The images in all of the CHM files I enumerated previously were correctly displayed with no mucking about.
SUCCESS!
The only mystery was what to attribute the success to. Maybe just some one-off problem that had been solved by restarting the OS.

Then I eventually SHUT DOWN Windows. This time when I started Windows back up again the situation had reverted to the original condition of not displaying any images (except that title page in the EndNote help).

Update: After reporting the above, I also SHUT DOWN Windows for a second time. Then when I started Windows back up yet again, the situation had swapped back to the 'correct' condition of displaying all images!

Yes, it's lots of information here, and maybe not all of it helpful, and certainly not really related to FontCreator. But maybe it'll eventually help someone else (or even me).

I have also just discovered that whenever images are missing, the styles are also ignored.

For the FontCreator CHM help file:

Inline text HTML formatting like bolding (<b>) or headings (<h1>) are respected, but formatting defined in the stylesheet (default.css) is completely ignored, so the font defaults to Times New Roman (on my system).


When I force the images to display by using the 'moniker' syntax to formulate a URI and view a page in Internet Explorer, such as mk:@MSITStore:C:\Program%20Files\High-Logic%20FontCreator\FontCreator.chm::/preview.html, and then press the F5 key to 'reload' the content, not just the image is displayed, but also the CSS is loaded, so that the font changes from the default (Times New Roman for me) to Segoe UI (as set in default.css).

P.S. Initially a message is also displayed "Internet Explorer restricted this webpage from running scripts or ActiveX controls", but I'm not sure that this is related to the above problems. 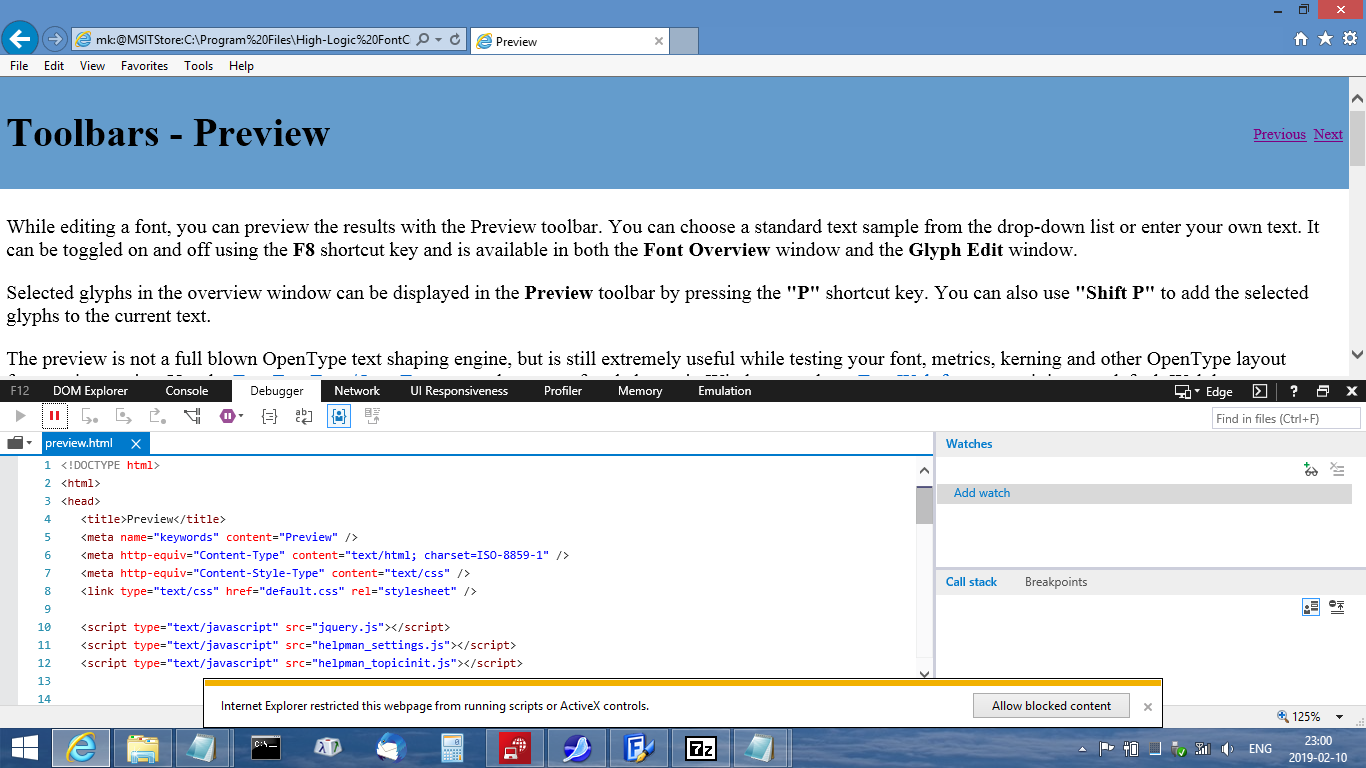 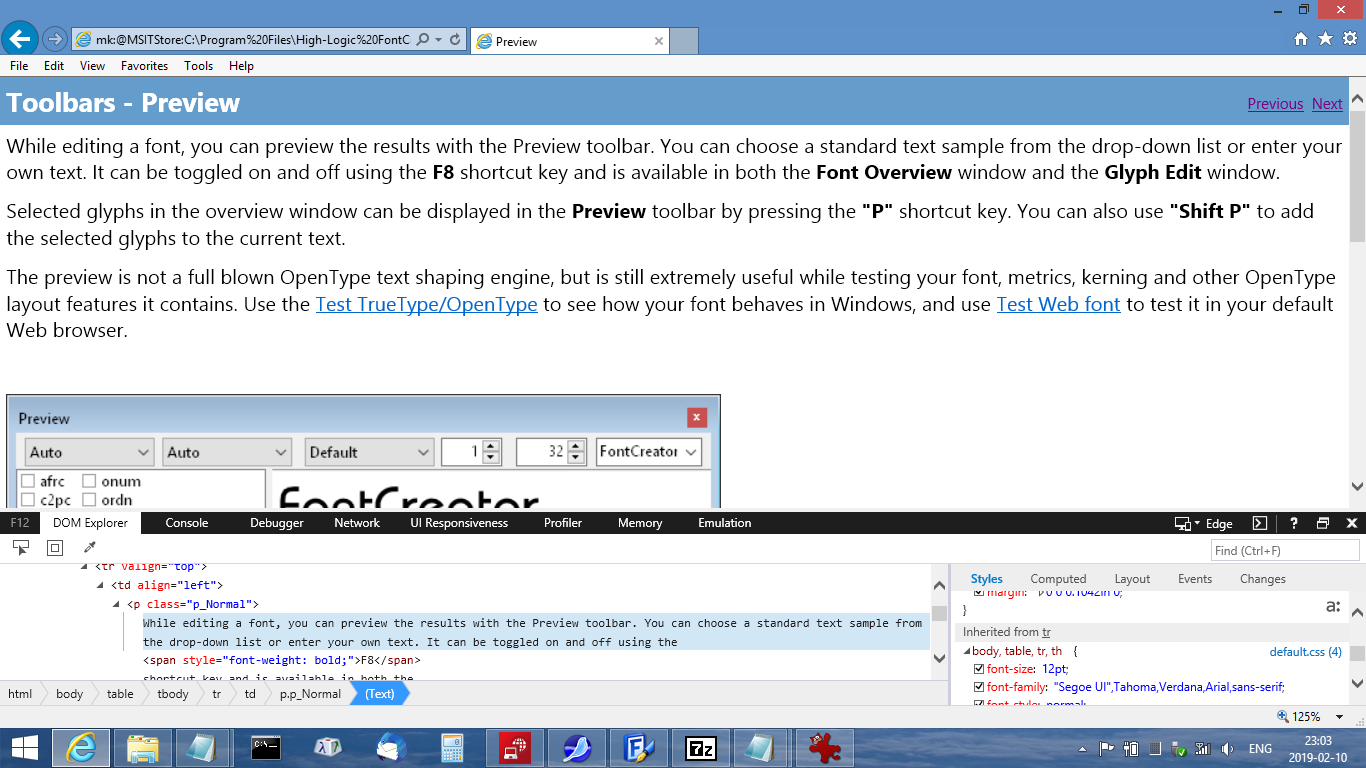 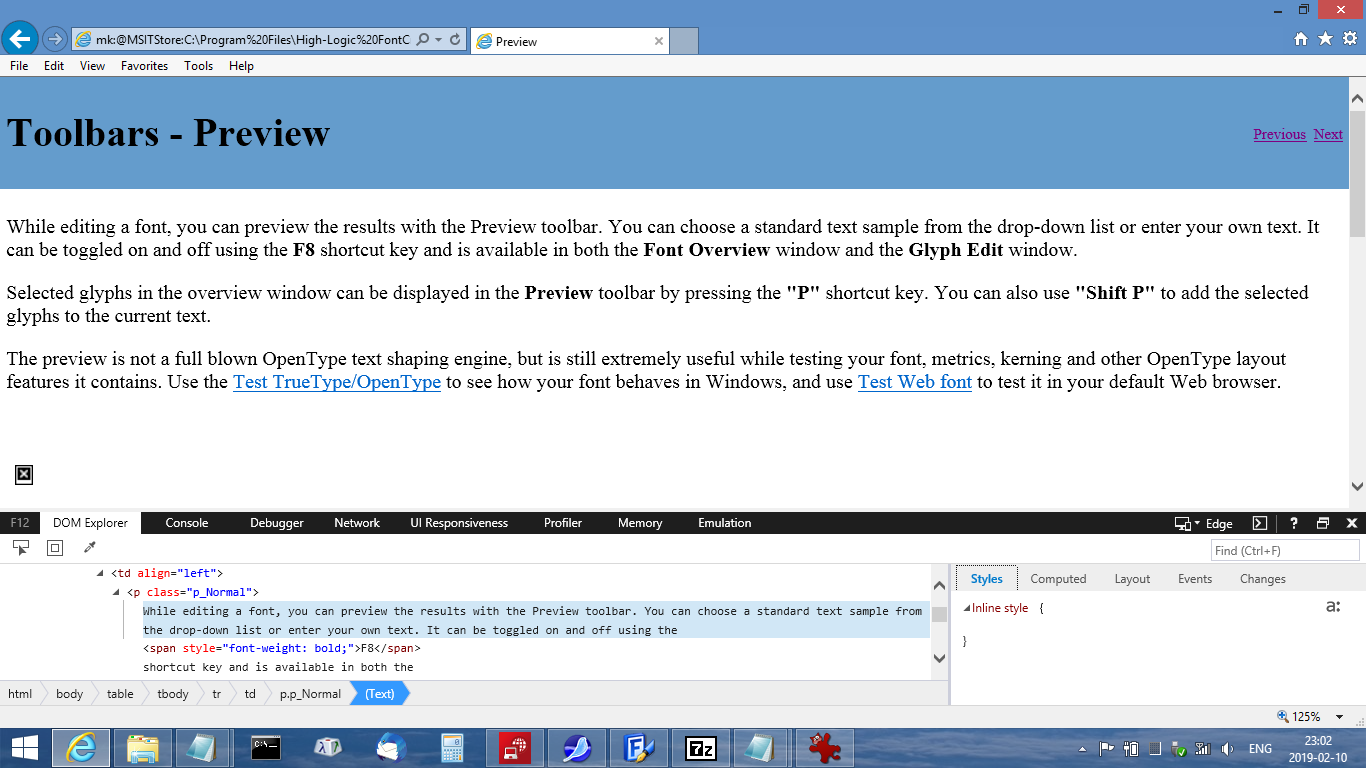 The images also seem to reliably show up in the default help browser (Microsoft® HTML Help Executable) by refreshing the page/content display. This is analogous to pressing the F5 key when in Internet Explorer. However, in the help browser there is no 'hotkey' to refresh the display, so it is necessary to navigate the menu, viz. Options > Refresh . As noted above, this also triggers the correct application of styles defined in CSS.
Top
Post Reply
13 posts • Page 1 of 1