Should I use visible glyphs for code points that normally render invisibly?

For U+FEFF ZERO WIDTH NO-BREAK SPACE, my fonts had a glyph with no contours and zero advance width.

Then I saw the SIL document Recommended Characters for Non-Roman Fonts (https://scriptsource.org/entry/gg5wm9hhd3), which suggests:
"BYTE ORDER MARK, making this visible might be helpful". Now this character is somewhat deprecated (I think there's a preferable WORD JOINER character), and I think the recommendation is based on visualizing a bytestream with the ubiquitous BOM character.

So I've started using this character in my fonts for U+FEFF, combining the BOM indicator with the Unicode intent of ZWNBS: 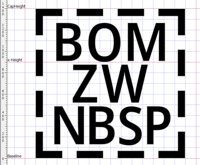 ... so the glyph that Word uses does appear to be composed on-the-fly based on some font metric, and does not relate to what is in the font.

I surveyed every installed font I have, and no font has a visible glyph at U+FEFF. They are all either blank or default to .notdef.

In addition to U+FEFF, the SIL Recommendations document lists other code points that should get visible glyphs. For example, there is a long (and impenetrably dense, to me) rationalization for why visible glyphs might be helpful for the Variation Selector characters (they name the 16 in the BMP, but omit the ones up beyond the BMP).

Should I install glyphs like this in the U+FE00-U+FE0F range?? 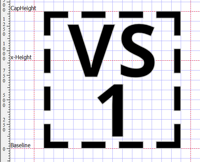