After working on so many fonts, I get to where I can't remember where I've done what. Perhaps I need to widen a few line here and there.
For those that are conversant in other languages than English, What glyphs need to be added?

I found one character that I needed in English which I hadn't figured on. In trying to decode problems in a text document using MS Word, I turned on the "show paragraphs" button and couldn't see anything as the Paragraph Sign ¶ (alt+0182) hadn't been drawn -- there was a blank glyph which doesn't show anything!

Interestingly, when I deleted all empty glyphs and reloaded the font the notdef character showed up as the paragraph sign (of course).

I had no idea the ¶ was a required character.

Why not Pi? I would use that a thousand times before using ¶ once.
What really worried me is how do you add an ogonek to that long tailed g?

There is no need to add an ogonek to the long-tailed g, it only needs to be added to vowels.

Adding accents to script fonts is quite a challenge. Almost every letter is a special case.

It helps a lot to add low profile accents to the font. Then you can have different accent designs for lowercase and uppercase. Complete Composites will use the low profile accents for uppercase and the regular accents for lowercase. Autopositioning is difficult for scripts too. Complete Composites will use autopositioning to centre accents on the base glyph with an offset for acute/grave and italics, but the optical centre is not always the same as the geometric centre, especially with script fonts.

Other glyphs, like æ or Þ need some creativity if they are going to match the font properly. Although you may never need more than a few accents, many users in Europe do require them for their daily work. Fonts without accents are next to useless for them.

Here is a very rough attempt. I haven't made much effort to design the accents to match the font, they are more suited to Garava italic than to Yolanda. The low profile accents should be designed to suit uppercase glyphs, then moved down to the same vertical position as the lowercase accents. Setting the advance width to zero and using a Capital A or E in the Comparison toolbar helps a lot with the design process.

Dave Crosby wrote: What really worried me is how do you add an ogonek to that long tailed g?

The character to which Dave is referring might be this one.

However, it is not a cedilla it is a comma. The Postscript name is gcommaaccent.

The Unicode code chart has an example of how one may deal with the possible conflict of a comma below with the tail of a lowercase g.

The document states "there are three major glyph variants".

It is all Martian (Klingon?) to me.
Aut nunc aut nunquam
Top

Thanks Dick and William.

Amazing what you can see after a few days.

The tail on the p was too short so I lengthened it by 100 units.
All the glyphs are now filled with the exception of Thorn and eth. I haven't figured out how I want to design them.

Sorry to send you back a little Dave but the joins between the following need attention:

Having said that, it is a font that I would love to have made. I'll use it on cards etc. if I may?

Thanks for that one.

Ah, Joe, you're a man after me own heart. Thanke lad!

I hadn't run the font through with Compare using r.
Thanks to you, now I have.
The w was a little squished, and there were corrections needed with the connecting Caps too.

All is corrected now, and the link above now connects to the latest version.

I think the figure eight would work better if the upper loop was open, like the zero or the six, instead of crossing itself. Something like one of these; 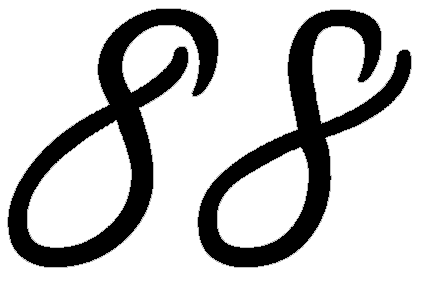 The + and = signs are slightly too high for the figures, and much too high for the lowercase. Look at "a+b=c" for example. Moving the plus sign down to the baseline and the other maths symbols likewise (about 100 funits) works better for this font because the figures are much lower than caps height, and x-height is very low.
My Fonts • Reviews: MainType • Font Creator • Help • FC12 Pro + MT9.0 @ Win10 1909 build 18363.720
Top

Tarnation! I never even Panosed it!
After entering William's diacriticals I should have reset Win Ascent. Now done and re-linked above.


I think the figure eight would work better if the upper loop was open, like the zero or the six, instead of crossing itself. Something like one of these;

Agreed and done. This forced me to do the same with G that never looked quite right to me.


The + and = signs are slightly too high for the figures, and much too high for the lowercase. Look at "a+b=c" for example. Moving the plus sign down to the baseline and the other maths symbols likewise (about 100 funits) works better for this font because the figures are much lower than caps height, and x-height is very low.

This one I disagreed on.
They were designed to work with the numbers which I want intermediate between minuscules and majuscules. I doubt my version will ever be used for algebra.

Dave Crosby wrote:BTW, knowing his excellent work, if he wishes I hereby grant Bhikkhu Pesala full rights to make his version of this font any way he wishes.

I like the font, and might enhance it to add to my collection of free fonts, but it is hard to make a script font with accents. The smart quotes are really problematic too. How do you get the single quote right for apostrophe, and lowercase letters, but still usable with uppercase?

Looks like the lc s should be single story... would appear to connect better... or remove the top left connecter
Top

Bhikkhu Pesala wrote:The smart quotes are really problematic too. How do you get the single quote right for apostrophe, and lowercase letters, but still usable with uppercase?

I suppose that, for an ordinary TrueType version of this font, the answer is that one does not.

Another possibility would be to make all of the smart quotes at a height so that they are useful as smart quote characters; and also to encode in the Unicode Private Use Area an apostrophe to fit the height of the lowercase letters. Such a Private Use Area encoding would not be standard, yet could be very useful if the font is being used to produce quality desktop published material on a printer, or indeed if the font is being used to produce a pdf or a graphic to publish on the web.

Some readers might like to know that there is a link on the http://www.unicode.org/charts/symbols.html web page to General Punctuation.

Dick Pape wrote:Looks like the lc s should be single story... would appear to connect better... or remove the top left connector

I'm crushed! Continuing the top left connector on around to form a true lower case s is what I like most about the font.
It forms a symbolic cat's eye saying "Here's looking at you kid."

Can't you hear it Dick? Just kidding, but variety of opinions is what helps the world go round.

Thanks to everyone for all the comments.
I still don't like the right hand connector on the o. I feel it needs to drop down more before swinging out to connect. The top right of the A should also be opened. I Panosed it as a Ball point because of the rounded ends. Perhaps it should be a Pressure Point because of the occasional flares? Yes, I just convinced myself. Do we EVER really finish a font?
Perhaps I should have placed this in the Discussion section instead of the Gallery.

Edit 25 Feb 2008
after mucking about for a bit I also changed the O to match the new A.
I considered doing the same with zero, but decided to keep them looking very different.