In the Tools Import Image... facility, the threshold level used is a number, used across the whole image.

I wonder if you could please consider altering it as follows.

There would be an option choice of using a file as the method of selecting the threshold value. The idea would be to use a grey-scale bmp file with a value in the range of 0 to 255 in each pixel. The file would be the same size in pixels as the file with the image. There would need to be a selection box so as to select the file.

This would allow a person seeking to make a font from an image to have part of the image used with a higher threshold than another part.

I do not know whether programming FontCreator to use a specific threshold value for each pixel of the imported image would be fairly straightforward to achieve or disproportionately time-consuming to achieve, yet such a facility could be useful sometimes when trying to produce a font from photographs of initial letters and ornaments from old books.

This request is out of scope of FontCreator. You should prepare the image you want to import through your image editing software. Apply filters, or whatever is needed to clean it up. That way you have endless ways to improve your image.
Erwin Denissen
High-Logic
Proven Font Technology
Top

One trick I use is to import an image into several glyphs using several settings and then copying/pasting together (cobble) the final image from the usable parts. In this way I insure I have a fully defined result.

Very nicely the cut and paste often places the result into the exact same position on the final image so there is no adjusting or nudging needed.

Thank you for a good idea.

If one goes to http://special-1.bl.uk/treasures/festiv ... kList.aspx and then clicks forward to page 4 of 11, there is a link to images from a book published in London in 1641.

Page 002 has an illustration at the top of the page. I enlarged it using the + button which is on the screen.

Using a screen display of 800 pixels wide by 600 pixels high (which is the screen resolution at which I normally use the computer, no special reason related to this image), I used the Print Screen button on the keyboard and then pasted the image into Microsoft Paint and saved as a 24-bit bmp.

I trimmed the image so that there was only the illustration and some paper around it. The result was 770 pixels wide by 270 pixels high.

Your suggestion provides an opportunity to have another try.

I find the design of the illustration interesting. The two halves have the same general shape, yet the details are different. For example, the flowers in each of the upper outside corners are different, though there is a flower in each corner.

I tried your illustration to see how it looks.

If I had to do it all over I'd lighten up the "original" to make the left side "perfect" and then combine it with the right side.

Of course I got rid of the British Museum red hand stamp, some extraneous noise and rotated it backwards a little.
Top

Off Topic. Thanks for the reference to the British Museum, William. I got to perusing the documents and found this picture of some strange beasts from Sept-Oct 1550. Wonder what they are? 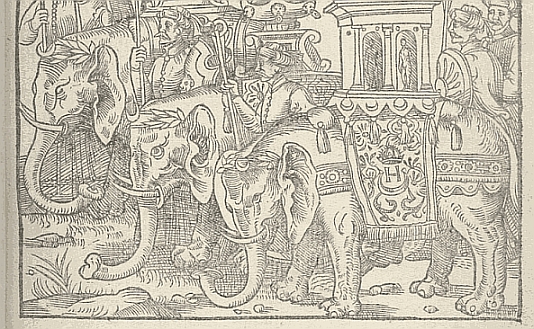 Not to mention the length of the trunks and the "thing" at the end.

The top page is as follows.

I tried to find the picture of the elephants in the festival books section.

Clicking on the Texts link leads to the following page.

So, could you possibly post a link to the book please?

Entry of Henri II, Catherine de' Medici, the Dauphin (the future Francis II) and Mary Queen of Scots into Rouen.

I found the following detailed record page, which shows details of other woodcuts in the same book as well.

And one last note

If you really want drawings see the book "Tournament with running at the ring and at the head, held in Paris by Louis XIV" (1662)

Groups from France, India, Persian, Turkish and America (really early but they were walking upright and riding horses!) were there for the really big event. Double page spreads and all. Great woodcuts (if you like that sort of thing).

These British Museum Festival Books Archives provided numerous examples of printing initials, borders and ornaments which were transcribed into the following three fonts.