Drawing Spiro Curves with Adobe Illustrator (Updated as the old page was no longer available).

This would make it much easier to draw smooth curves. There is already a request to auto-reduce nodes to make smoother curves, but Spiro Curves would be much better.

I am surprised that this thread hasn't generated more interest. The video is worth watching, and the implementation of some method for much easier curve smoothing is certainly worth considering for the next version of FontCreator.

I was not able to watch the video, I only heard someone talking about Spiro. It seems the Intel ITU H.264 (h264) codec is not installed. I've just installed it and took another look. It looks very impressive, but I'm not sure if and how it could benefit people who use FontCreator. Maybe FontCreator should include an special import feature...
Erwin Denissen
High-Logic
Proven Font Technology
Top

Erwin Denissen wrote:I'm not sure if and how it could benefit people who use FontCreator. Maybe FontCreator should include an special import feature...

FontCreator already has a smoothing filter, but I still need to use time-consuming workarounds like this for smoothing curves after autotracing or manual drawing. I spend ages reducing nodes and smoothing curves in my fonts.

At least, we need some feature that will autoreduce nodes, but Spiro does more than that. In effect it makes each on-curve point into a smooth node.

The other thing it has is a brush-like feature for drawing variable width curves. A brush that would allow the drawing of uniform strokes would also be very useful in FontCreator.
My Fonts • Reviews: MainType • Font Creator • Help • FC13 Pro + MT10.0 @ Win10 2004 build 19041.746
Top

I downloaded the latest beta of Inkscape (October 13th release) from this page and had a play with the Spiro Curves. This was my first attempt at drawing an S. 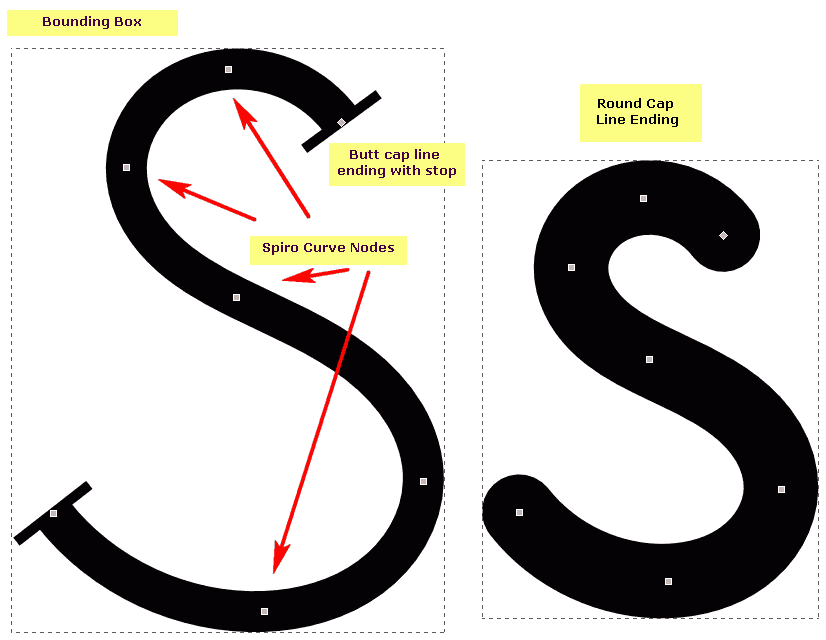 Just seven nodes are required to get a smooth curve, and it is very easy to adjust. Since it is a vector drawing program, Inkscape has lots of options that FontCreator wouldn't need — fills, colours, etc., and all kinds of line-endings. The only suitable endings I could find were slab serifs, which I used with butt line caps. Otherwise, one could use no line-endings and rounded line caps.

Font Creator would need several different serifs instead of arrows, triangles, and diamonds for line endings. It would need an option to create custom serifs too.

A calligraphic stroke would be useful for FontCreator. The stroke weight would need to change depending on the angle of the stroke.

After drawing with the Spiro line tool FontCreator would have to convert it to a filled contour. As there is no way to save a spiro curve in a Truetype Font, I suspect the easiest way would be to convert all Spiro curves to contours on saving the file. The curve could also be converted to a contour by using an Apply button on its context sensitive toolbar, rather like we currently click on “Apply” to complete a contour when inserting a new contour. Before that, the curve would be fully adjustable for shape, line ending (Serif style), stroke weight, and stroke width contrast and angle.

Possibly, the Spiro Curves could be saved as a separate data file in the same folder as the font, but then that starts getting complicated.

And here is a second attempt — this time an Ampersand with just seven nodes. 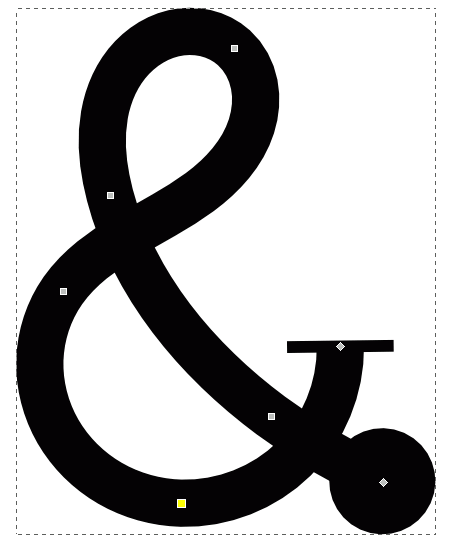