Before asking a question on FontCreator look here for possible solutions and tutorials. Please do not post support requests here.
Post Reply
11 posts • Page 1 of 1

Dan X Solo[/url], born in 1928, is one of my Heroes. He became interested in printing as a teen when he bought some lead cast typefaces, and spent most of the rest of his life collecting new and exotic fonts. He ran a profitable printing business specializing in unusual typefaces for many years. The SoloType Catalog contains 4,147 Display Typefaces.

In 1976 Dan began publishing Royalty Free Font collections through Dover Publications. There are over 30 titles in his name, most of them containing 100 complete typefaces each.

Tasmin is from his 1979 collection "Sans Serif Display Alphabets" page 96. 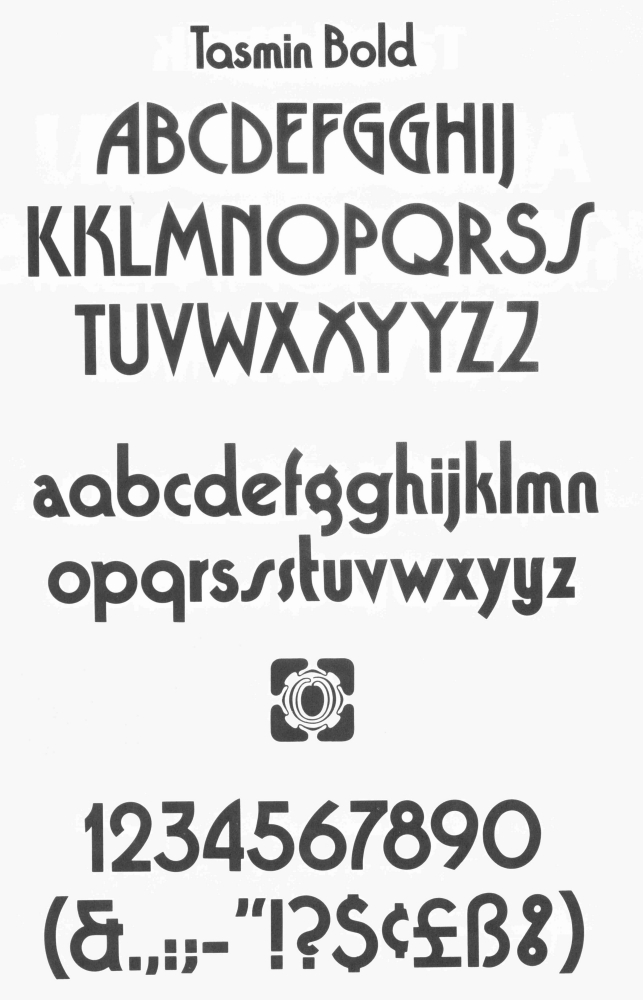 Now, what is the easiest way to convert these images into your Font Creator font?

I like to scan the whole 8 1/2 X 11 inch page so everything is sized the same, and the whole typeface is in one handy place.
Today I think 600dpi (dots per inch) in jpg format is the best choice. I can reduce down from that later on if desired.

When I first started using Font Creator, I made jpg files for each individual character. What a waste of time and effort! Now I just use the masking tool in Corel Photo-Paint 8 to select the individual images directly from my master image and copy them to the clipboard, then paste them directly into the appropriate FC glyph editing window. The work moves along quite well. However, it IS useful to make ONE file for one character to set the proper multiplier in Import Image.
The Texas Dude uses "Snagit" to do the same job. Most image editors will work.

Before copying to the ClipBoard, as Erwin says, Size Matters! You have three paths available.

1. Go for it, and re-size later. This may induce distortions. 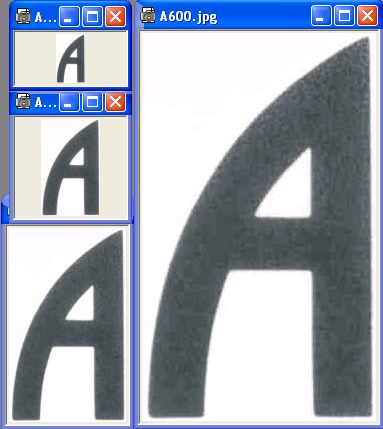 2. Resize the whole image so each character pastes at the desired f-unit size. Interesting things can happen using this method.

3. Change the Default Multiplier Setting in Import Image. Probably the best choice. There WILL be deviations in output, so some minor re-sizing will be necessary. Usually Contour mode works best to make minor over-all adjustments. 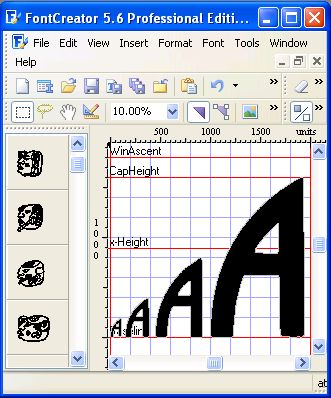 With a little experimenting, I found that a Multiplier of 4.22 would paste the A from my original 600dpi scan at 1599 f-units high.
That is close enough to my desired 1600 f-units. 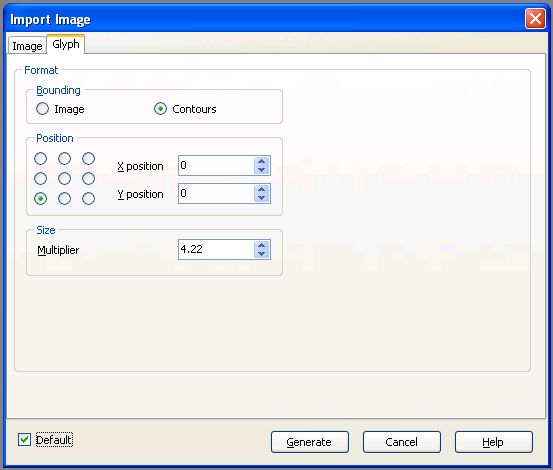 That is enough information to verify that doubling the Multiplier would work for maintaining the desired size for each reduction in dpi.

NOTE: Bhikkhu Pesala has recently pointed out that using Smooth Filter None will produce sharp corners.

Another important consideration is the Threshold Setting for Import Image. 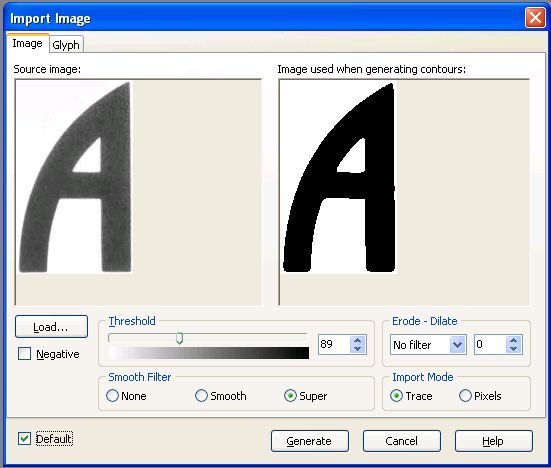 Where do you want the cut-off point accepted from those gray pixels?
0 = all black, 255 = all white. By sliding the scale, you can see the changes as more and more pixels are being accepted or rejected.

Experiment and find out what works best for your scanner and graphic program.

First Decision: How big do you want your Cap M? (EmSq)
As explained above, I like 1600 X 1600. You will have to decide whether this will include "White Space" or not.

As the original Cap H on this page is only 5/8 inch tall, a direct paste around 1600 f-units tall required an Image Multiplier of 4.22

Click on the Import Image Button and make your preferred settings in the Image and Glyph windows, Check the Default box to keep your settings.

To move to the next glyph editing window press one of the blue arrows to advance or close the editing window and select another glyph from the main screen.

As Cap H and x-height values are set by placing these two glyphs (H, x) in a new FC font, they should be the first two glyphs pasted in. Make sure the tops of the glyphs are where you want them.

Time for another decision. Which G are you going to use? Which S?
Where will you put the alts, or will you just forget them?

I prefered to paste all the characters into a new font, save it (lots of times in between) and then start the cleanup process. 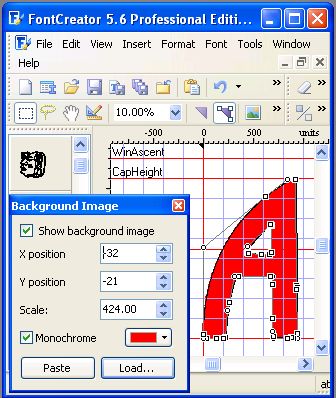 With this font, I noticed how easy it is to paste to the glyph editing window, then paste to the Background ToolBar (View > Toolbars > Background) while the image is still in the clipboard, polishing as I go. Overall, this method appears to work far better than my old one.

You will notice that a few new glyphs are straight up and down, but some lean left or right. This will probably happen no matter what you do.

Sometimes the characters are drawn slightly crooked, or printed or cut crooked in manufacture. It is hard to get the book square on the scanner. Whatever the cause, it happens. In some places the ink bled or was smeared. No big deal. Now is the time to straighten them up.

a. Stem Width. Look before you leap! What is the average stem width of the glyphs? They are probably not all the same. What width is most common. What width do you want?

That is clumsy so I decided to use 350 on the Caps.
242 seemed to work out well for lower case.
If you don't like that, change it on your version.

Sometimes it is easier to just use the Eraser Tool and start over using the Rectangle Tool.

For T you will have to do a little calculating. I went with 700 f-units wide for the top. That places the center of the stem at 350, and the edges 175 on each side of that.

c. Finish with the Curves.

Remember, the higher the dpi (Dots Per Inch) setting you used to scan your image, the larger the resulting image will be,
... and the more pixel jags your FC pasted image will have.

The BAD NEWS of going with a lower dpi is that corners are no longer well defined, and curves go a little "wobbly."
If glyph edges are well defined, straightening up the corners is easy, but the curves?

"Consistency is the Hobgoblin of Small Minds."
I made them all 100. 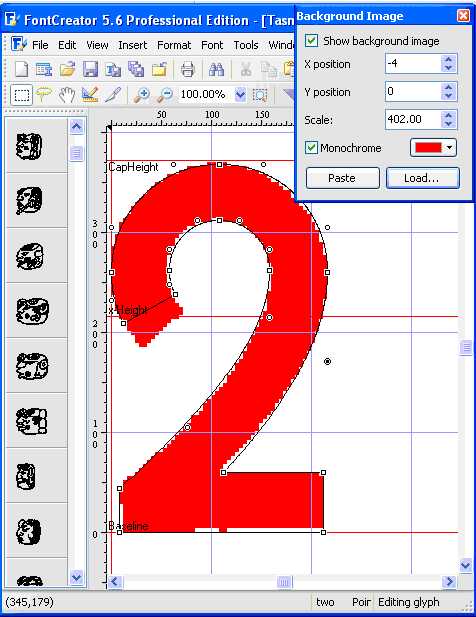 For most curves, 2. is often the best choice. 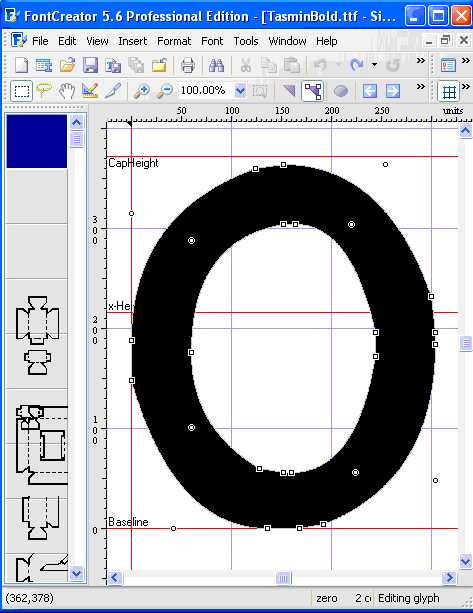 Pitiful, huh?
Remember that the circle or ellipse fits in a box shape. Define at least one corner! Two diagonal corners are even better. Move an off-curve point to this location(s).

How? select a side point and look at the numbers at the center bottom of the screen (the left hand bottom numbers tell you where your curser is). the first number tells you how far the point is from the x-axis. Move the (possibly new) off-curve point to that distance. Now select a top of the curve point and look at the second number at the bottom. Move the corner point to that height, and you now have the corner properly located.

Select the Ellipse Tool, and set the cross-hair on any corner point, hold down the left mouse button as you drag the resulting circle/ellipse across the space. If you want a perfect circle, hold down the Shift key while forming the circle.
You may want to magnify the work area as much as possible for more accurate placement while you do this. 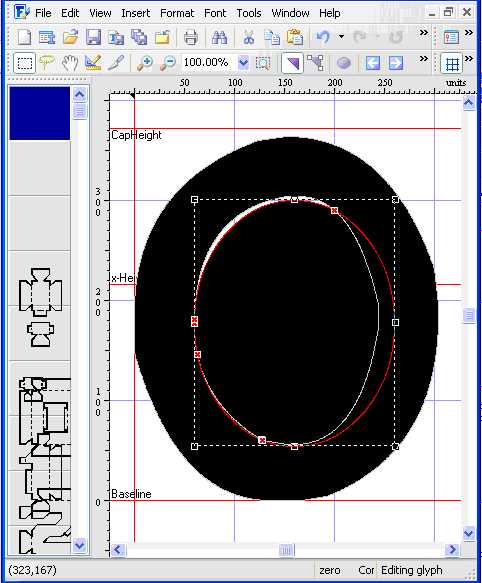 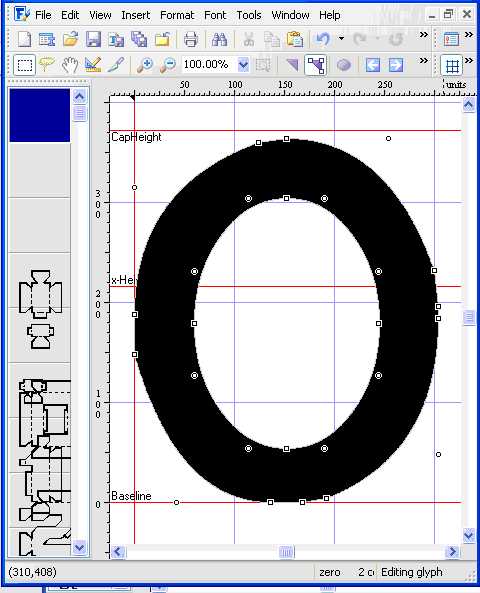 I find it easiest to do the inner contours first. Don't forget to reverse their directions!

At this point you are well advised to change to contour mode and use the Q & W keys to step through the contours and delete the old inner contours.

Now for the outer contour. Use the Ellipse Tool to make both circles and make sure they fit fairly well over their respective parts of the glyph, and cross at the original meeting points. 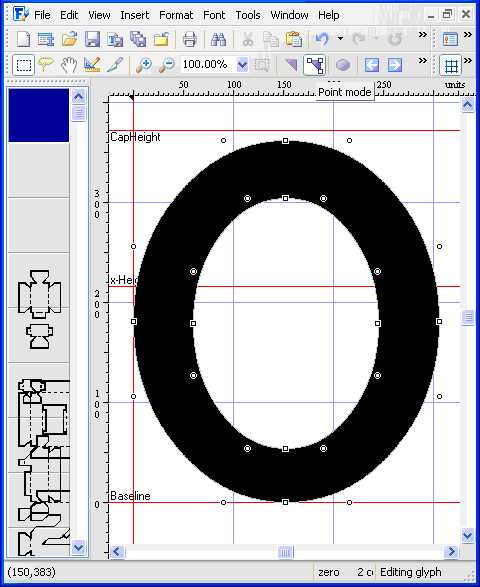 Validate! When you think you are done with a glyph, it is good practice to press the Glyph Validate (blue with a red !) button to verify you haven't made any errors. On finishing the font, select Font > Validate to check out the entire font.

On 17 Sep 2007, Erwin informed me as politely as possible that I had a problem with my old Corel Photo-Paint Scanning Software. "I'm convinced your scanner can do much better." He graciously provided a "snipit" of scanning software to try, and he was right! I had no idea I was working under such a handicap.
I did wonder how Dick Pape was getting such marvelous results.

I asked Erwin to remove this tutorial while I re-wrote it. I hope this new incarnation is of value to you. - Dave
Aut nunc aut nunquam
Top

That's a very charming font. Thanks for making it available.

Your tutorial is also quite informative for even an "Old Hand" like me!
Top

steveb wrote:That's a very charming font. Thanks for making it available.

Your tutorial is also quite informative for even an "Old Hand" like me!

You are welcome Steve! All compliments are much appreciated, and I was serious when I complimented your work.

I thank you for that! I've taken the advice given elsewhere on this Forum an started cleaning up some of my older fonts. Is it my imagination, or has it become very much easier in the latest version of FC?
Top

steveb wrote:I thank you for that! I've taken the advice given elsewhere on this Forum an started cleaning up some of my older fonts. Is it my imagination, or has it become very much easier in the latest version of FC?

It is not your imagination. FontCreator has improved steadily with each new release. See my review. Version 5.5 brought significant improvements to Font Validation, and version 5.6 has improved in many areas — especially Complete Composites and Manual Kerning.
My Fonts • Reviews: MainType • Font Creator • Help • FC12 Pro + MT9.0 @ Win10 1909 build 18363.657
Top

Character apparently likes the font, but not the spacing or kerning, both easily done with Font Creator, but I have never played with kerning, and I have never claimed to be an expert.

Character states he may work on it. That would be much appreciated.

Invitation: Please do and share your finished version here with us.
Last edited by Dave Crosby on Thu Mar 06, 2008 11:22 am, edited 1 time in total.
Aut nunc aut nunquam
Top

The problem with the spacing is that it was done with Autometrics, so all of the side-bearings were the same — 100 funits.
Try using Glyph Transformations, then you can set bearings for a selected range of glyphs, and increase/decrease bearings for selected glyphs. 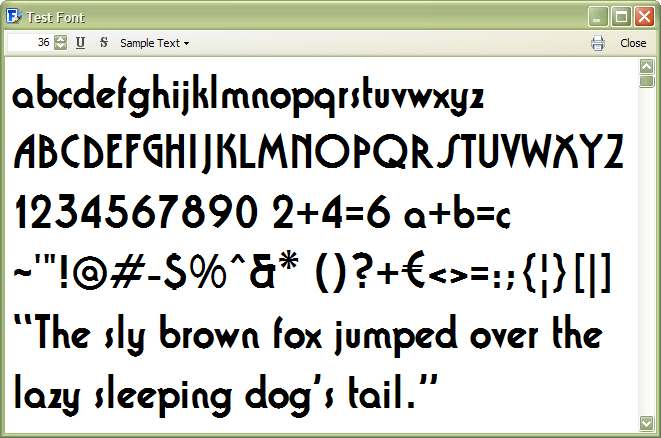 Thanks Bhikkhu Pesala, That is indeed much nicer.

As a kerning neophyte, should ab be closer together? How about la?

Fo also look wide to me, but then what do I know?

Thanks for improving the font and adding so many useful glyphs!
Aut nunc aut nunquam
Top

I used "Import from File" for Autokerning, because "Select Glyphs" generates thousands of pairs, many of which are unlikely to appear in normal text. I am surprised that pairs with F and lowercase glyphs like aeor are not included in the kern_standad.txt file. Maybe I messed up the defaults.

I updated the font, which now has 2,733 kerning pairs after using "Select Glyphs" (I deleted a few and didn't include all glyphs). Kerning is something that needs its own tutorial. I hope that Autokerning may be improved in future versions, but I am sure that it is difficult to program.
My Fonts • Reviews: MainType • Font Creator • Help • FC12 Pro + MT9.0 @ Win10 1909 build 18363.657
Top

Hey after all your work can we sell it now? (College Fund for ED children or some other charity.)
Top
Post Reply
11 posts • Page 1 of 1