Discussion of Symbol fonts in the viewtopic.php?f=3&t=2636 thread prompted me to try to make a Symbol font.

However, thus far there are glyphs which are selectable using the following, those are the keys to use, some glyphs are letters, though most are not.

Digits produce glyphs with the same number of contours, except that zero has ten contours

< > { } are pop glyphs for boxed arrows left right up down

All are on a square body, as is the space character, so designs may, if desired, be produced as if the glyphs were metal single type border units.

This is the font mentioned in the viewtopic.php?f=1&t=2641 thread.

I have just been trying the Pop Symbols font using Microsoft Paint.

In Paint I used Image Attributes... and set the width to 300 pixels and the height to 200 pixels. I then outlined an area using the Text tool, set the font to Pop Symbols (having previously installed the font on the PC which I am using) at 24 point and then keyed some characters, including using the return key a few times and a row of spaces for the middle line. I then saved the result as a png file. The design is exactly as it happened, there has been no pixel-level editing.

Here is the result. 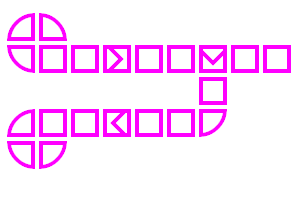 Readers are welcome to make designs using the font and, if they so wish, to upload their results into this thread.