I was using the Courier New font in my fiction writing, but found the regular to be too thin, and the bold to be too thick. I then found Courier Prime, that in regular was a thickness I enjoyed using. This Courier Prime font is distributed under the SIL Open Font License (OFL) that allows one to modify an existing SIL OFL font in a derivative work, as long as the derivative font uses a different font name, acknowledges the original work, and is also distributed under the SIL OFL. Finding this out led me to start making changes to the letters and the punctuation characters to look more like I wanted them to look. Simply based on my personal preference.

In the image below, the first of each character is Courier New, the second is Courier Prime, and the third is...let's say my Courier Timza.

Ok number one. If I create a courier font that for the sake of argument I call Courier Timza, how close should my Courier be to the original Courier or Courier New? As you can see in the image below, I did not like the line at the top of the A, the curve in the foot of the capital K and R, the curve in the bottom serif of the Courier Prime lower case a, the rectangular dot in the lower case i and j, the lower stem of the lower case y, the straight line of the 2, and the serif on the 4. But then, the creators of Courier Prime did not follow Courier New in their f, t, r, and y.

In the below image, the third character is where I am now with what I will call here my Courier Timza font. I don't like the f that much, but I do like the other characters. I like the 2, but maybe you would say it does not go with the 7 and is not historically the Courier 2. I like the 4, but maybe you would say that the serif of the 4 needs to match the lower serif of the i and l. I do think the dot of the i and the j should be the same, and I think should be round like the period. I also think the upper curve of the f should match the lower curve of the j, but as the top of the f curves, maybe it gets too close to the cross of the f.

Please feel free to point out what you see and think. What beginner mistakes am I making? What problems have you always thought that Courier has that you would recommend my font solve?

I thought I would group some characters together that maybe should have some similarities.

I don't actually agree that the last f and r should be an exact match for the lower parts of the y and g and j that are shown, but it is fun to actually do that and examine the results. Maybe this is where font artistic design starts to help define where there are differences and where there are similarities.

BTW: Screen shots will be sharper (and often smaller) as PNG. 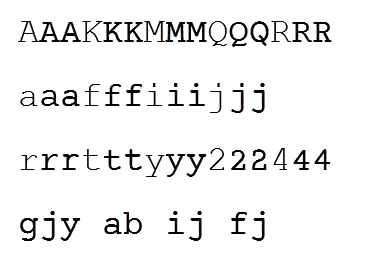 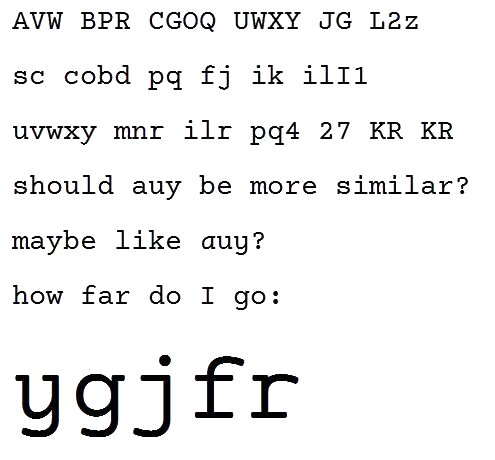 I do see what you mean about the four, but I could also say that since the seven does not have a serif, then we need to remove the serifs from both the one and the four to match. It is like a Rubik's cube that keeps shifting, depending on what characters and what parts of what characters one views as needing to be similar. But, it is funny that I hate the number on on my favorite typewriter, because it does not have a serif. It has the flag at the top, but not the serif at the bottom, so I use the lower case L like on the older typewriters. With the Courier font, I do like the lower case L with the serif and the straight flag, and the number one with the serif and the dropped flag.

Ok, thank you for the tip on the .png file, this is where I am right now, feel free to let me know what you think: